Who Needs Oral Torah? On Living a Jewish Life 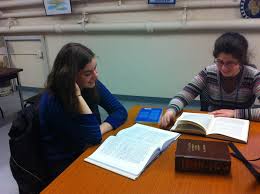 It makes me want to scream! But instead, I think I will write. Take the following points and put them in the order that makes most sense to you.

This point is made clearly in Jeremiah 35, the story of the Rechabites, who refused to drink wine when offered some by Jeremiah because they were honoring the command of their ancestor Jonadab. God then draws a lesson from their behavior: “The command that Jonadab the son of Rechab gave to his sons, to drink no wine, has been kept, and they drink none to this day, for they have obeyed their father’s command. I have spoken to you persistently, but you have not listened to me.”

Jews keeping Torah is all about Jews honoring God their father, or neglecting to do so. That is why God lambasts the priests through Malachi in these terms.

“A son honors his father, and a servant his master. If then I am a father, where is my honor? And if I am a master, where is my fear? says the LORD of hosts to you, O priests, who despise my name. But you say, ‘How have we despised your name?’ By offering polluted food upon my altar. But you say, ‘How have we polluted you?’ By saying that the LORD’s table may be despised. When you offer blind animals in sacrifice, is that not evil? And when you offer those that are lame or sick, is that not evil? Present that to your governor; will he accept you or show you favor? says the LORD of hosts.

God compares himself to a father, and excoriates the priests for neglecting the stipulations of Torah in their handling of sacrifices. And he makes it a matter of dishonoring him.

So for us Jews, obeying Torah is a matter of honoring the God who brought us up out of Egypt, or of just not bothering to do so, thank you.

We read this in Torah:

5 See, I have taught you statutes and rules, as the Lord my God commanded me, that you should do them in the land that you are entering to take possession of it. 6 Keep them and do them, for that will be your wisdom and your understanding in the sight of the peoples, who, when they hear all these statutes, will say, ‘Surely this great nation is a wise and understanding people.’ 7 For what great nation is there that has a god so near to it as the Lord our God is to us, whenever we call upon him? 8 And what great nation is there, that has statutes and rules so righteous as all this law that I set before you today?

9 “Only take care, and keep your soul diligently, lest you forget the things that your eyes have seen, and lest they depart from your heart all the days of your life. Make them known to your children and your children’s children.(Deuteronomy 4:5-9 ESV)

Notice that it is as the Jewish people keep these laws in particular, and in a united manner, that we become a collective signpost pointing to the God who delivered us from Egypt and gave us such laws. There is a communal grandeur about millions of people following the same body of laws in concert with each other simply because God told them to. It brings honor to God, and that is my point—and Jeremiah’s, Malachi’s, and God’s point as well.

For us to decide to do “what is right in our own eyes” and to, as a rule, depart from Jewish communal consensus, deprives Torah obedience of its collective communal God-honoring character. For us to obey Torah in ways that consistently differ from those of our people is for us to disrupt and destroy the unity of Israel because we think we have “a better idea.”

This is tragic. Unless and until one finds that obeying Torah in Jewish ways involves rank sin and unrighteousness, we should adhere to these norms out of respect for the people to whom the Torah was given, the Jewish people, and our people’s long history of grappling with its meaning and implications. The Torah is not a book we found in a bookstore: it is the legacy of a people. And to ignore or repudiate that people’s experience with and interpretations of that book seems to me at least to be evidence of contempt and chutzpah, especially for Jews who ought to know better.

Talmudic scholar David Weiss-Halivni speaks of private truth and public truth. Faithful Jews are allowed, even encouraged, even required to be honest about the ways they differ from accepted the interpretations of the wider Jewish community. The ways in which you see things, whether in agreement or disagreement,  is your private truth. But if you are a loyal member of that community, you are not thereby justified in disruptiing communal practice and cohesion because you think you know better. That would be to disrupt and destroy public truth and communal cohesion. It is better to preserve group cohesion than to show everyone how bright you are.  Yes, in the words of Rabbi Spock, "the good of the many outweights the good of the one."  (And yes, of course I know that in matters of sin, one should always break ranks).

The body of Oral Law is a highly stylized record of centuries of discussion on this issue: “What does it mean for us to obey God in this situation? In that one? Under these circumstances? Those?” This is not just the Talmud and the Codes, but also later Jewish discussion. This doesn’t mean we will always agree: but where it does not involve sin, we should at least attempt to conform. And if we are going to disagree, it would be nice if we knew what we were talking about. However, this is not the general practice of Messianic Jews, who don’t know the difference between the Mishnah and the Mishneh Torah, and who yet feel entitled to jettison “The religion of the rabbis.”

The stipulations of Torah have never existed apart from a community discussing, “How are we going to do this?” And as soon as you have such a discussion, you have Oral Torah. This may trouble you, but get used to it. It is inevitable.

There will be ways in which Messianic Jewish thought and halacha (practice) differs from that of other Jews. But the necessary differences will be surprisingly few.

We are either part of the remnant within Israel or part o the remnant from out of Israel. The difference is huge and it is crucial. Which will it be for you?

God did not call you to become imitation Jews. For example, the Torah says: “You shall bind them as a sign upon your hand and they shall be for frontlets between your eyes.” Jews understand this to mandate the wearing of tefillin (also called Phylacteries). While Gentiles can and should respond to this text as well, they are not called to understand the text in Jewish ways—therefore, Gentiles wearing tefillin is excluded. Otherwise things get strange, the unity of Israel is disrupted, and one insinuates that the non-Israel nations are second rate, as are their people. To say as much is to disparage the God who made all the nations, and to show contempt for the non-Israel peoples he created. It is also to misrepresent the gospel which makes Gentiles to be the people of God without requiring they become Jews.

And of course there are Gentiles who are involved in supporting Jews in their observance, and this is a good thing. This is especially so in intermarriages, where the Gentile partner supporting the Jewish partner and the family in honoring Jewish life and community is surely something honorable.  And in Messianic Congregations, where there are Gentiles who likewise support Jews in conforming to Jewish life, this is also good. But I gently point out that such Gentiles should not see their task being to modify or redraw that way of life. Nor should they feel it to be the elite religion that everyone should practice, It is not. "“Moses charged us with a law, A possession for the assembly of Jacob" (Dt 33:4).

Not everyone will agree with me on what I say here. In such matters, I have learned to take the words of Paul as my watchword, and I suggest you do the same.

“Who are you to pass judgment on the servant of another? It is before his own master that he stands or falls. And he will be upheld, for the Lord is able to make him stand.” (Romans 14:4 ESV).

Let us walk in respect for each other, and with our Jewish people even when that is respectful disagreement. But as for me and my house—what I have laid before you here is what I aspire to stand in and stand for.

For additional brilliant insight on these issues, see this article by Rabbi Dr. Mark Kinzer, from the website of the Messianic Jewish Rabbinical Council www.ourrabbis.org

The article is to be found at http://ourrabbis.org/main/documents/Oral_Torah_Kinzer.pdf

One comment on “Who Needs Oral Torah? On Living a Jewish Life”