What's The Big Idea? Your Worldview and How You See REALITY 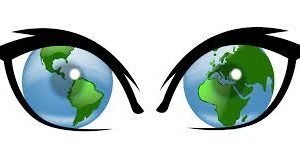 Some ideas are so pivotal that they can and do lead to paradigm shifts, fundamental changes of perspective that give rise to entirely new questions and new answers. It is like the difference between standing with your back to the Grand Canyon and turning around to face it. Once you turn, everything changes in an unforgettable way. (If you want to know more about paradigm shifts, the first book you should read is a classic by Thomas Kuhn, “The Structure of Scientific Revolutions”).

I call these reality transformational concepts which can and should create for us all a giant paradigm shift BIG ideas. And one of these is the concept of worldview.

What follows is a mere smidgin of what could be said on this great subject. What I offer here are three brief stories that illustrate the power of the concept, followed by a brief definition and challenge.

A major project to which I believe myself to be called by God will require a different cash flow for my wife and myself. So a couple of weeks ago I stepped up prayer for finances. Then a few days ago, I received a letter indicating that before the end of the year, I needed to make a compulsory withdrawal from a pension fund. The only problem is that I never knew about this pension fund. There had been another from this employer that I had totally emptied years ago, but this one? Never heard of it! So my wife and I scrambled to get the paper work done, bureaucratic phone calls ensued, and now we have some money we never knew existed. So here’s the question: was that an answer to prayer or just serendipity or synchronicity? Your answer to that question has everything to do with your worldview.

Vivian, senior citizen Jew born in Russia, could always be seen with a smile on her face and a Bible in her lap. She was a tzakkiket, a holy woman in my congregation. At about the age of eighty she developed arthritis that so incapacitated her that she could not walk unaided across the living room of her double-wide mobile home. So, together with Esther, one of the members of the congregation, I went to visit Vivian to pray for her. She was sitting on a couch, with me on her right side, and Esther on her left. I told Vivian that I was going to pray for her. She of course agreed. I turned toward her and put my hand on her shoulder, and inhaled prior to praying. Before I could say a word, her right leg jerked forward and she said “I think I’m he aled!” I thought, “Silly old woman!  I haven’t done anything yet!”  But the next day she went for a mile and a half walk––a woman who, the day before, could not walk across her living room. Had she experienced an intervention of God?  Your answer tot aht question has everything to do with your worldview.

In 2006, Jeff Markin, an auto mechanic in his early fifties, not feeling well, came into the waiting room of the Emergency Room where Dr. Crandall was on duty. Before he could be attended to, Markin dropped to the floor with coronary arrest. He was immediately taken back into one of the patient areas and for forty minutes the crew there, using all the knowledge and equipment at their disposal, sought to restart his heart, jolting him with the defibrillator paddles no less than six times. All to no avail. By then his extremities were turning black due to necrosis (cellular death due to a lack of blood flow).  The attending nurse began washing the body in preparation for transport to the morgue.

The crew paged Dr. Crandall so that he might sign the documents indicating the time of death. He came in, examined Markin, and signed the documents. Then as he turned and walked out the door, a Voice told him, “I want you to go back and pray for that man.”Crandall thought, “But God, he’s dead!  I have never seen someone so dead!  What good will that do?”  But despite his resistance, the Voice repeated the command.

Crandall went back into the care area, and the nurse looked at him puzzled, asking what he was doing there. Then Crandall placed his hands on Markin’s chest and prayed a brief prayer: “Father, if this man does not you, please bring him back from death.” Then Crandall asked the other attending physician to jolt Markin with the paddles “one more time.”  The doctor was incredulous but Crandall said, “Do it out of respect for me.”

He then took the paddles, placed them on Markin’s chest and jolted him one more time. The response was immediate. The flatlined meters began to pulse with a perfect heart beat. Markin began to breathe. The nurse started screaming, “Dr. Crandall!  What have you done?” Raising people from the dead was not part of her worldview!  She felt like she was in the presence of Dr. Frankenstein!

Markin was in intensive care for three days before he woke up, with no brain damage, no impairment except some numbness in his extremities where necrosis had set in after his death. Well, did he die or didn’t he? Did Dr. Crandall hear from God? Did he witness a resurrection?  Or was Markin just temporarily indisposed, and Crandall suffering from an overactive imagination? Your answer to that question has everything to do with your worldview.

What Is a Worldview?

Here is a fragment of discussion and a definition borrowed and adapted from Charles H. Kraft’s excellent book, Christianity With Power: Your Worldview and Your Experience of the Supernatural.

These assumptions and the channels or guidelines we form based on them make up what we call worldview.

Therefore, worldview is the culturally structured assumptions, values, and commitments underlying a people's perception of REALITY, that is the totality of what is as seen and known by God..

To put it most briefly then, a worldview is the collection of “of courses” held by a given society or group of people. These are unquestioned assumptions.

A Challenge For Us All

So the challenge for you and for me is this:  what are our “of courses” and do they support or negate what is set before us by the Bible we claim to believe?  Do we read the Bible avidly but believe and act more like Deists or even Atheists? What are the worldview assumptions, values, and commitments that shape what you actually believe, how you picture REALITY what is real and unreal, what is possible and not?

If you want to have a fruitful conversation with me about these things, send me an email at stuart@interfaithfulness.org

But if you want to argue, hey, I’ve got lots of other people you could contact!

To see a video covering this material visit https://youtu.be/iuuDx1o8fzo

7 comments on “What's The Big Idea? Your Worldview and How You See REALITY”

Previous Post
« Review of Bari Weiss, How to Fight Anti-Semitism