What If? Three Dreams You Might Dare to Dream 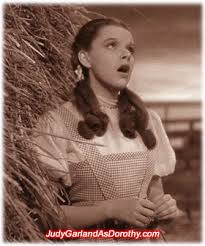 Judy Garland reminded us that over the rainbow "the dreams that you dare to dream really do come true."  Here are three dreams from over my rainbow. You might dream these too!

#1 - What if Jews who believed in Yeshua [JBY] really lived Jewish lives, walking in the patterns of Jewish tradition, but with the marvelous something and someone extra of Yeshua-faith and the amazing spiritual influx that was typical of the earliest days of the Yeshua movement?

#2 - What if Christians didn’t feel threatened by Messianic Jews returning to Jewish life and community, not denouncing this by speaking of “rebuilding the middle wall of partition,” but instead realized that living within the norms of Torah and tradition is part of God's call upon all Jewish people, including Messianic Jews? What if?

#3 - What if JBY respected and supported Christians in their own service of God, encouraging them in their walk with God and never adopting a superior or denigrating attitude toward Christian worship and tradition? What if?

I am reminded of the words of Scholem Asch, the great Yiddish writer who flourished in the 1930's and 1940's.  In his splended essay, "One Destiny" he said this:

I, as a Jew, whose every move is bound up with the God of Israel, want to know nothing of any historical wonder, of any faith, save only the wonder and the faith which radiate from the God of Israel. The wonder is revealed to me in two ways: first, the miracle of the preservation of Israel; second, the miracle of the spread of the Judaeo-Christian idea in the pagan world. The whole thing to me represents a single, divine event. I see in both phenomena the single will of the God of Israel. Not only because I consider my Christian brothers as the spiritual children of Abraham, Isaac, and Jacob, but also because I see in pure Christianity an entirely justified share of faith in the God of Israel--through the Messianic idea--equal to my own Jewish faith. The preservation of Israel and the preservation of the Nazarene are one phenomenon. They depend on each other. The stream must run dry when the spring becomes clogged, and Christianity would become petrified if the Jews, God forbid, should cease to exist. And just as the spring loses its value, becomes spoiled and moldy when it has lost its mission and does not water the stream, so would Jewry itself become petrified, barren, and dry if there were no Christendom to fructify it. Without Christendom, Jews would become a second tribe of Samaritans. The two are one. And notwithstanding the heritage of blood and fire which passionate enmity has brought between them, they are two parts of a single whole, two poles of the world which are always drawn to each other, and no deliverance, no peace, and no salvation can come until the two halves are joined together and become one part of God.

Whoever works, strives, and desires that this may come to pass is on the side of God. Whoever does otherwise belongs to the other party.

This is my spiritual credo. On this foundation I have built my house. For this I have sacrificed everything. With it I stand and with it I fall.