The Rabbi, The Scholar, and the Messiah: The Real Kosher Jesus [Part ONE] 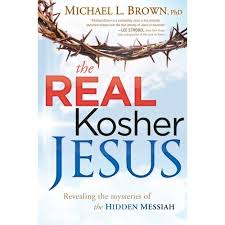 As I mentioned in my most recent blog post, one of our concerns at Interfaithfulness is to Reconstruct Yeshua/Jesus. By that we mean re-examining our views of who Yeshua is, of what he said about himself, and what his disciples said about him, and revising our own views accordingly. We want to bring the mental constructs we have of  Yeshua into correspondence with the Yeshua of Reality. Some people express this idea this way: "No more plastic Jesus." Precisely.

Dr. Michael L. Brown addresses the same concerns in his own way in his 2012 book, The Real Kosher Jesus: Revealing the Mysteries of the Hidden Messiah. Brown is a truly prolific author.  He is best known for his books responding to just about every possible objection some people have to believing in Yeshua. It is obvious to anyone who reads his books that Dr. Brown is a meticulous scholar. The Real Kosher Jesus is more popularly written, but still worth a read. In his Preface he tells us that he wrote the book in two and half months, due to a sense of spiritual urgency about the project. This is not the first time he has written so quickly. In fact, sometimes Michael Brown writes books more quickly than some people read them!

In part this book is a response to another, Kosher Jesus by Orthodox Rabbi Shmuely Boteach, who has frequently debated with Brown on the credentials of Yeshua. In Kosher Jesus, Boteach makes takes a commonly found position, that Yeshua was a loyal Jew who led a respectable and instructive Jewish life. His teachings were fully pharisaic, and he never really claimed to be more than he was--a good, passionate, and prophetic Jewish leader. Or so the story goes. But Boteach goes further and says that Yeshua was really a failed revolutionary who, as a passionate and prophetic Jew, sought to mobilize his rag-tag band of disciples to force God's hand and to lead Israel in throwing off the Roman yoke.

Brown will have none of this, and artfully convinces us to join him.

In the first section of his book, "Yeshua-Jesus-Yeshu: Who is He?" Brown begins by summarizing how loaded is the issue of the Messiahship of Jesus and why. He tells how Martin Luther's virulent anti-Judaism and anti-Semitism laid the foundation for the Shoah. In that sense, Luther may be called the John the Baptist of Adolf Hitler. He goes on to briefly sketch the history of antisemitism in the church, while being helpful and careful to point out that for the first three centuries, there was no violence against the Jews. However by the fourth century that changed. He also sketches how the early church was a very Jewish concern and how the nature of the church changed as it developed a Gentile majority. He says this:

By this time (meaning the fourth century), the church had become so detached from its Jewish roots that it turned Peter into the first pope, banned Christians from observing the seventh-day sabbath (changing it to Sunday), and celebrated Easter in place of Passover (Rather than celebrating the Messiah's death and resurrection during the Passover season, as the first believers did).

He provides a well-informed and succinct survey of a wide range of mostly Jewish books about Jesus the Jew, summarizing the viewpoints they embodied. In general, the Jewish reclamation of Jesus leans toward setting the stage for the kind of portrait Shmuely Boteach offers in his book. Boteach depends especially on the work of Hyam Maccoby, a British Jewish scholar and dramatist who specialized in the study of the relationship between Christianity and Judaism. Boteach follows Maccoby's lead, and sees Yeshua and his disciples as failed insurrectionists.  Brown aptly shatters these illusions.

For example, he illustrates how Yeshua was a first-century rabbi by four criteria:

But Brown does not stop there. He then lists and discusses ways in which Yeshua was a rabbi like no other:

For Brown, it was in this prophetic role that Yeshua got himself in trouble with the establishment and eventually died on a Roman cross. Brown makes his case on two fronts.  First, he shows that seeing Yeshua as merely having been an excellent and typical rabbi fails in any way to account for his execution, for his stature as a compelling figure for two millennia, and for his controversial status in the Jewish world. In keeping with teachers like Scott McKnight in A New Vision for Israel, Brown sees Jesus as functioning in a spirit of prophetic crisis, seeking to bring Israel to repentance to avert of an impending judgment. In this capacity, Jesus confronted and irritated the religious establishment, and was eventually turned over to the Roman authorities who became convinced he was a trouble-maker best disposed of on a cross. The second avenue of Brown's case-building is how he thoroughly refutes Boteach and Maccoby's assertion that Jesus and his disciples were failed revolutionaries fomenting insurrection against the heel of Rome. He exposes as flimsy and untenable the textual  "evidences" Boteach and Maccoby adduce for their case, showing them to be misconstrued metaphorical language, and not, as Boteach and Maccoby assert, tell-tale clues to the insurrectionist truth which the writer of the Gospel of Luke carelessly failed to hide.

Brown's book is a very interesting read, well-written and accessible. Although scholars will want something less popularly-written and "crunchier," most people will find it a good and informative read.

One comment on “The Rabbi, The Scholar, and the Messiah: The Real Kosher Jesus [Part ONE]”

Next Post
The Rabbi, The Scholar, and the Messiah - The Real Kosher Jesus [PART TWO] »