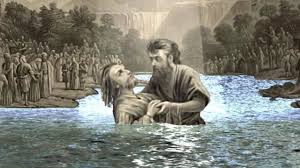 I recently visited with long-term friends and thought to visit the church where they attended. I sat in the front row with the wife half of this couple. The church was a famous one, perhaps the best known in their city, and very well run. The music was great. The announcements up on the Power Point screen were read aloud by someone off stage who obviously had public speaking training, She was worthy of a TV voice-over.  Everything was smooth and professional.

It was a day of baptisms, and one of the senior staff people gave the sermon. In the process, he gave a perfect illustration of why I don't often visit conservative churches or listen to Christian radio.

Here is part of what he said as he discussed the baptism of Yeshua, as recorded in Matthew, chapter three. See if you don't catch why I was appalled:

The religious context was this that that whole area had been dominated by Judaism for centuries, centuries, centuries. Jewish observance of the letter of the law and the imposition of man’s traditions had developed really into a dead religion and Isaiah the prophet said that very clearly in Isaiah 28. He said the Lord says this, “This people near to me with their mouth and honor me with their lips but their hearts are far from me. Their worship of me is made up only of rules taught by men.”

That was the Lord’s assessment of what had become really religious legalism to the nth degree. But a new day was dawning. That’s why this baptism was taking place. A new day was dawning historically and theologically. John the Baptist had been preaching a call to repentance in Israel. The spirit of the Lord upon him had penetrated the hearts of the listeners, and many of the common folks obviously had been disillusioned by the rules and by religious tradition. After centuries of blind observance of rituals and laws impossible to keep, John had burst onto the religious plane with the anointing of the Holy Spirit calling out sin in the hearts of the people, calling them to a place of repentance, and it was registering, it was stirring the pot big time. People identified with his message. They knew their own hearts, you see. They knew the darkness in their own souls.

They heeded this call to repent, and they were coming and saying, “Yes, I want my past covered, I want it behind me, I want to follow God.”

So John was baptizing them, it was called a baptism of repentance. And it really pointed to a shift in the religious landscape, the traditional control, of the requirements imposed by the law, was being minimized by John’s message. And what they didn’t know at that point was that that was God’s plan from the beginning.

The religious elite were there, and they voiced strong opposition to John’s baptism. Tension was acute between John and the religious leaders, and so with Jesus. Jesus had become, this was very early in his ministry, he had become known, and I am sure it was a very surreal moment when he went to John, and stepped into the public scene and asked John to baptize him. John was shocked, “You’re asking me to baptize you? “ He’s the one of whom John said, “He is coming after me and I am not worthy to unloose his sandal strings.” But Jesus says, “Do it John.”

I told my friend, "This is disgusting!"  I hope all of you reading this can guess why. This is an old trope, an ancient meme, extolling the gospel and the Messiah by contrasting him to an allegedly bankrupt, oppressive, self-righteous and worthless, burdensome Judaism. This habit of contrasting an allegedly superior Christianity to an allegedly bankrupt Judaism is so engrained in Christendom's cultural and theological DNA that most hardly notice. Surely, none of the 1200 or more people in that sanctuary that morning registered a protest. They thought nothing of this.  They were hearing a very familiar "gospel," the dark gospel of anti-Judaism. Such a rhetorical stance goes all the way back to the Second Century and Justin Martyr, who was the first to commend the gospel by trashing Judaism.

I wish I could say this is a rare occurrence. But just about every time I twiddle the radio dial and come across some Christian preacher who talks about religious Judaism, I encounter the same kind of diatribe. It makes me sick. It makes me angry. And as a Jewish believer in Yeshua, it makes me very much ashamed.

On the way to lunch afterwards, I commented on the sermon to the husband half of my friend-couple, and he characterized it as "replacement theology."  No, that's not what it is. Replacement theology is the name we give to theological systems which posit the theological disinheritance of the Jewish people, to be replaced by the new Israel, the Church. No, this was not that. This was worse. This was anti-Judaism--the assumption that Christianity is right because Judaism and just everything about it is wrong.

So I ask this question. Is Jesus such a flimsy Savior, and is his resurrection so mediocre, that we must give him a boost by positioning him upon the rubble of a rhetorically demolished Judaism? Can he not stand on his own merits?  And can't we lift Yeshua up without putting Judaism down?

Apparently we can't, at least not according to some people.

4 comments on “The Lousy Way Some People Lift Jesus Higher”