Tending the Flickering Flame of Faith in a Philosophical Friend 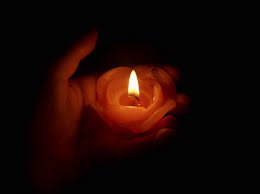 Recently, a philosophically oriented friend who believes in Yeshua wrote me, asking, "What if we are wrong about this? Ultimately, how can we know it is really true?" What follows is a slightly edited version of the answer I gave to that question. Perhaps you or someone you know will find it interesting or helpful.

"How do we know that Yeshua is the Messiah, really?"

Many people will give you different answers to your question, and in truth, the answers to it are many layered. People will talk about Messianic prophecy. They will talk about his resurrection and the way this fact and conviction took hold very strongly in a small group of discouraged disciples, revolutionized their lives and relationships, and spread throughout the ancient world like wild fire. They will discuss personal experience, healings, and other evidences historical, communal, and personal.

But this is the answer that rose in my heart when I read your question this morning.

Ultimately our knowledge and proof of Yeshua as Messiah is parallel to the knowledge and proof that Moshe Rabbenu had that HaShem, the God of his fathers had indeed met him at Mt Sinai and was indeed sending him despite his own sense of personal inadequacy.

The core text to remember is this one:

Ki ehyeh imakh. Ki zeh-l’kha ha’ot ki anokhi sh’lakhtikha; b’hotizakha et ha’am mimitzrayim ta’avdun et ha’Elohim al hahar hazeh - “I will surely be with you. Your sign that I have sent you will be that when you have led the people out of Egypt, you will worship God on this mountain (Shemot/Exodus 3:12).

What is at the core of this particular kind of faith knowledge that Moses experienced with respect to HaShem and which we experience with reference to Yeshua?

2)    There must be an openness to knowing in the person of faith, and this opening exists in the midst of self-doubt about the very possibility of knowing. In fact, faith is not the absence of doubt, but the presence of trust, and faith always exists amidst doubt: "I believe, help my unbelief."

In verse eleven, Moshe Rabbenu asks, “Mi anochi ki elech el par’oh v’ki otzi et b’nai Yisrael mimitzrayim? - Moshe said to God, “Who am I, that I should go to Pharaoh and lead the people of Isra’el out of Egypt?” What is Moshe really asking? It is one question with two interactive aspects, one is apparent and the other is hidden.

The apparent aspect is, “Who am I that I should have this experience, this level of encounter, this level of authority, and this dramatic turning of my life?” It is a question born of self-doubt amidst the magnitude of the proposition being considered. In Moshe Rabbenu’s case, the proposition being considered was that he indeed had met with the G-d of his ancestors and had been commissioned by this G-d to deliver the people of Israel from 400 years of slavery in Egypt, from the grasp of the mightiest despotic nation on earth, despite the fact that Moshe himself was now eighty years old, and a discredited failure tending somebody else’s sheep. That is the apparent aspect. It is the doubt centered in “Who am I to lay claim to such an experience?”

So again, in the midst of these two kinds of doubts, hidden and apparent, there must be an openness in the potential knower. Moshe Rabbenu’s openness is apparent in that he asks the question, ““Who am I that I should go to Pharaoh and bring the children of Israel out of Egypt?” Indeed he asks a series of questions repeatedly revealing his doubts about himself and about the alleged revelatory encounter he is having. And yes, those who love G-d and those who love to think about Him are right in saying that we will discover in retrospect that it is the unseen G-d who drews us to ask the questions.

We see this in the experience of Moshe Rabbenu, because the bush burned prior to Moses’ inquiry—it was the burning bush that drew Moses to inquire. Similarly, it is still God who draws us to inquire today. In fact, it is God who draws us to wonder about Yeshua, about the validity of our experience, and to seek a deeper certainty about the validity of our claims about our faith experience and about his credentials.

3)    This kind of faith-knowledge begins with a holy word of assurance, spiritually given and spiritually discerned. In answer to Moshe’s request for reassurance, HaShem first gave to Moshe a word of reassurance, Ki ehyeh imakh, “I will surely be with you.”

The editors of the NET Bible, supply this helpful footnote on this phrase: “The particle  כי (ki) has the asseverative use here, “surely, indeed,” which is frequently found with oaths (R. J. Williams, Hebrew Syntax, 73, §449). The imperfect tense אהיה (’ehyeh) could be rendered as the future tense, “I will be” or the present tense “I am” with you. The future makes the better sense in this case, since the subject matter is the future mission. But since it is a stative verb, the form will also lend itself nicely to explaining the divine name – he is the One who is eternally present – “I am with you always.”

Similarly, persons of faith,  (potential) faith-knowers, experience a spiritual spark, a little flame of faith that lights up this question within them. God has already spoken to them, and inside, often in a manner they cannot describe and that has no specific weight or overwhelmingness, they have sensed God’s word of reassurance—“I am here, I am with you, I will be with you,” etc. And this happens also in the context of Yeshua-faith.

4)    The proofs and therefore the certainty of this faith-knowledge are proportional to the degree to which we give ourselves to the fulfillment of the conditions or commission divinely laid upon us.

The ironic thing for Moshe Rabbenu at this time is that he is asking for an ex ante faith, a prior faith, “How shall I know now that you are going to do that then?” God’s answer is marvelous. It is this: "When you have led the people out of Egypt, you will worship God on this mountain." In other words, it is only AFTER or AS Moshe obeys that he will know. This is so very true, and I can assure you this has been my experience and that of uncoountable others as well.

It is in the doing of God’s will, in the actualizing of this flicker of faith that one experientially discovers its validity.

The Bible of full of examples like this, as is our experience. One example will do for now. When Shim’on Kefa sees Yeshua walking on the Sea of Galilee, he asks a Moshe Rabbenu type question, such as you are asking now about your own faith experience:

Then Kefa called to him, “Lord, if it is really you, tell me to come to you on the water.” 29 “Come!” he said. So Kefa got out of the boat and walked on the water toward Yeshua. 30 But when he saw the wind, he became afraid; and as he began to sink, he yelled, “Lord! Save me!” 31 Yeshua immediately stretched out his hand, took hold of him, and said to him, “Such little trust! Why did you doubt?” 32 As they went up into the boat, the wind ceased (Matt 14).

What are some of the conditions we must fulfill in order to experience the validity of our Yeshua faith? Some examples:

5)  Realize that the realities of God’s Kingdom are often counterintuitive. On the face of them they look utterly ridiculous. This is characteristic of God’s dealings.

For Moshe Rabbenu, as he went back to Egypt on faith, and began to experience the miraculous interventions of God, his faith was validated and grew. Faith led to experience, and experience led to faith. So it will be for us.

In my own life for example, I have seen God intervene in miraculous ways repeatedly and from time to time, but not constantly. One still has to endure the dry times in order to appreciate the rain of God’s provision.

All of these things will prove true for you as well.

7)    Realize that faith can flicker when we turn away from the object of faith to look at ourselves and at our arguments for what we believe.

C.S. Lewis said that there is no divine truth we are more inclined to doubt than the one we have just defended because when we defend a divine truth, our attention shifts to our own defense of it, so we are not so much believing a truth, responding to an encounter, as trusting in or not trusting in our own explanation of that encounter. The two are not the same thing.

Besides the answers I have given this morning, there are others that people will offer. Perhaps we can consider their merit together some time. I would just remind you that the certitude that God gives us, the validation of our faith, is conditioned by the nature of what we are speaking about. It is a different kind of knowledge than other kinds of knowledge, but a true knowledge just as well, just as people in love have a knowledge about the validity of their love which is different from mathematical proofs.

Previous Post
« What Do Messianic Jews Stand to Learn About Outreach from The Rebbe's Army? (Part Two)

Next Post
What Do Messianic Jews Stand to Learn About Outreach From The Rebbe's Army? (Part Three) »