Review of Bari Weiss, How to Fight Anti-Semitism 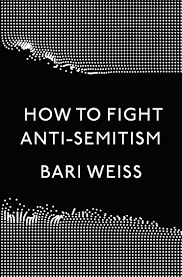 Bari Weiss is an opinion writer for the New York Times who formerly wrote for the Wall Street Journal and for Tablet, the online magazine of Jewish politics and culture. Politically left of center, she is a committed Zionist and proud Jew, with roots in Pittsburgh, Pennsylvania. People on the Right as well as those on the Left will at times feel defensive reading her surgically precise description of how anti-Semitism has morphed in our day while gaining new strength. That everyone will find something to offend them is one reason  How To Fight Anti-Semitism is a must-read. That is, if you value being awake more than being asleep. The book is an alarm clock with no snooze button.

Her first chapter aptly titled “Waking Up,” begins with a text message received from her sister the morning of October 27, 2018: “There is a shooter at tree of life,” naming the synagogue home of three Jewish congregations a mile and half from her family home. In terse and staccato language, Weiss helps us feel the pounding pulse and cold sweat of the minute by minute, sometimes second by second unfolding of events, as texts give way to phone calls, eventually disclosing the full, and for her family, intensely personal horror of a day when a holy sanctuary was left strewn with the dead and dismembered bodies of the holy seed of Jacob. She then convinces us that anti-Semitism threatens all of us, not just the Jews. It is a malignant disease bringing death not only to people but also to the soul of America. We all need to wake up.  Death is on our doorstep.

In Chapter Two, “A Brief History,”  Weiss delivers a bundle of the Jewish facts of life and death interwoven in the Jewish journey as a stigmatized and persecuted people, introducing us to a broad array of definitions of anti-Semitism. Each of us will find a favorite definition, mine being the one she quotes from Paul Johnson who says that anti-Semitism “is a deeply rooted and highly infectious thought virus carried in the DNA of Western culture” (33). Throughout the book, as here, Weiss educates without ever losing our interest. Even those who were not sure they wanted to take this ride will be glad they climbed aboard because Weiss is a masterful story-teller.

Chapter Three examines the Right world-wide, and certainly in America. Here she will talk about Donald Trump, indicting him for his ambiguous and complicit response to the alt-right and white supremacists, especially in the Charlottesville affair. Many people on the Right will be offended at her critique or Trump, while some will be convinced that she has a point. Weiss is nothing if not persuasive. Chapter Four administers the same medicine to the Left as she diagnoses its particular strains of the anti-Semitism virus, including its cloaking anti-Semitism in anti-Zionism. What she says here will antagonize many on the Left, but addressing the curse of anti-Semitism is so urgent for her that she, and we too, must be prepared to lose friends rather than lose the truth.

Chapter Five examines radical Islam, and the varieties of the anti-Zionist narrative it promotes. She includes a retrospective on the historical relationship of Islam with the Jewish world, and how matters have grown more acrimonious in our day. Weiss maximizes our attention level with her skillful analysis of how patterns of European Islamic migration have contributed to an increase of Western, not just Islamic, anti-Semitism. No, this is not a comforting read. But with every chapter we grow more grateful to Weiss for waking us not simply to anti-Semitism over there, but also over here. She convinces us that we not only have a battle on our hands, we have homework to do. And we must not avoid it.

She helps us get to our battle and to our homework in her final chapter, “How to Fight.”  This is wonderful writing, providing us with twenty-nine practical steps to take if we would undo the damage anti-Semitism has done to us internally as well as to our culture. The chapter is best characterized as “wisdom.” It is hard to imagine how someone as young as Weiss, born in 1984, arrived at such sound and practical judgment. But she did. And now that wisdom is ours as well.

Readers will join me in being grateful not only for the depth of her diagnosis, but also for the richness of the treatment and medicine with which she equips us to fight the good fight we must fight against anti-Semitism in all its current manifestations.

This is a disturbing book, but all who read it will agree that we needed to be disturbed. Buy it. Read it. Respect its critiques, especially when they are aimed at your own crowd. Let the book change your mind and sharpen your perspective. Read it with others and discuss it. Let it shape an agenda for action.  These are not matters for idle interest.

It’s time to wake up. Actually, it’s past time. Heed the alarm.

2 comments on “Review of Bari Weiss, How to Fight Anti-Semitism”

Next Post
What's The Big Idea? Your Worldview and How You See REALITY »