Political Temptations: Yeshua's, Ours, and Our Leaders' 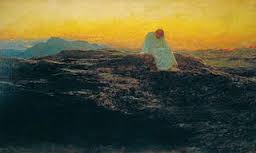 As part of my current responsibilities, I teach a fantastic women's havurah in Los Angeles.  Last night we were looking together at Luke Chapter 4, and it occurs to me that this passage has something to say that shines the light of spirituality on the current political turmoil in the United States.

After his immersion in the Jordan River by Yochanan haMatbil, a.k.a. John the Baptist, followed by the descent of the Holy Spirit upon himself, Yeshua is driven by the Spirit into the wilderness where he is tempted by the Adversary. But first he fasts for forty days, fortifying himself spiritually for the experience. Afterward, he was of course very hungry. This ordeal is to test the caliber of Yeshua's sonship to the Father, just as Israel was tested in the wilderness as to her own sonship.

Many years ago a Pastor I knew defined temptation as the proposition presented to the mind to satisfy a legitimate desire in an illegitimate way. We see that in this section, and also see that in a sense these three temptations are political

The question for us to consider is what legitimate desires was Satan proposing that Yeshua satisfy in an illegitimate manner?

Here is the first temptation:

3 The Adversary said to him, “If you are the Son of God, order this stone to become bread.” 4 Yeshua answered him, “The Tanakh says, ‘Man does not live on bread alone.’”

And in our current political arena, the temptation is the same: to exercise authority in a willful manner, apart from proper consideration of the broader purposes of God. Yeshua had the wisdom and focus to resist the temptation.

Is such restraint evident in our current political arena?

The second temptation is as follows:

5 The Adversary took him up, showed him in an instant all the kingdoms of the world, 6 and said to him, “I will give you all this power and glory. It has been handed over to me, and I can give it to whomever I choose. 7 So if you will worship me, it will all be yours.” 8 Yeshua answered him, “The Tanakh says, ‘WorshipAdonai your God and serve him only.’”

This is the temptation of utilitarianism, wherein the ends justifies the means. Yeshua, as the Son of Man spoken of in Daniel 7, was certainly entitled to the power and the glory of dominion over the kingdoms of the world.  "All" that the Evil One required is that he "make a deal with the Devil" that he take an illegitimate means to a rightful end.

Can there be any doubt that such "arrangements" lie strewn in the pathway of today's political leaders, the constant and often disguised temptation of the ends justifying the means, of utilitarian short-cuts, in effect, deals with various kinds of devils?

Do we have any grounds for confidence that our leaders have the capacity to recognize and resist such ploys?

9 Then he took him to Yerushalayim, set him on the highest point of the Temple and said to him, “If you are the Son of God, jump from here! 10 For the Tanakh says,

‘He will order his angels
to be responsible for you and to protect you.
11 They will support you with their hands,
so that you will not hurt your feet on the stones.’”[c]

12 Yeshua answered him, “It also says, ‘Do not put Adonai your God to the test.’”

This is the temptation to presume that God will pull one's cookies out of the fire, to presume upon Divine backing for whatever decision one makes. This is a powerful temptation, to throw caution to the winds expecting that God is on one's side and that he will make up the deficit.

But the mistake here is two fold: first, to throw caution to the winds. No, in the political arena on cannot rightly bypass exercising caution. And second, it is always foolhardy to presume that God sees things they way you do and that he is going to for sure back up your act.

No, in both the personal arena and in the political arena it is wise and necessary to be both cautious and humble, to be both thoughtful and prayerful.

As was the case with Yeshua, so we too personally, and our leaders politically, are going to be tempted in these three ways, to wrongly exercise authority, to make utilitarian "deals with the Devil," and to presume upon the backing of God while failing to be both humble and cautious.

These temptations leave us much to think about for ourselves and our leaders, and, as occasion warrants, provide us guidance concerning cautions we should be raising at such a time as this.

One comment on “Political Temptations: Yeshua's, Ours, and Our Leaders'”

Previous Post
« In An Age of Outreach Sterility: A Recipe for Multiplying Congregations