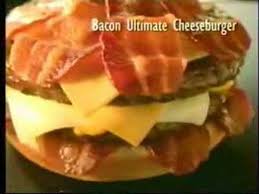 Let's imagine for a moment that the Apostles Peter, Paul and James are gathered together in Jerusalem. Paul has just finished participating in a Temple ritual with four men from the Jerusalem congregation, and afterwards, Peter and James meet with him, congratulating and thanking him for his participation.

On their way back to the Upper Room, they pass a Ya'akov BaTevah (Jack in the Box).  What with the New Covenant having been in effect for about 20 years already, wouldn't all that kosher stuff be kind of passé by now? Couldn't they just stop off for a Bacon Cheeseburger Deluxe?

In the next few blogs we will deal with this pressing issue: Would Peter, Paul, and James eat the Bacon Ultimate Cheeseburger®?

For a little background, consider the following passage from Leviticus:

Five times in the passage we read it (or they) is/are unclean to you. Of course, one of those listed forbidden foods is pig, from which one gets the bacon on the Ya'akov BaTevah Bacon Ultimate Cheeseburger®. The passage says that the pig "is unclean to you."

1.  Here's the first big question for today: What makes pigs to be ritually unclean?  Choose One:

2. And the second big question for today is this: for whom is are pigs unclean? Choose One.

If you were following well, and doing some good thinking, you will have learned today

Until next time, SHALOM!

Previous Post
« A Time To Repent: Choosing Change By Choosing Your Words