On Saving A Soul and Losing a People 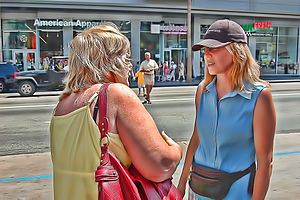 I am sad today, quite sad. I was talking to a young believer in Yeshua and getting a read on what many of his generation think of the things I stand for. Not nice. Not nice at all. What made me sad was not so much being discounted and disparaged, although that was there, and that hurts. But more than that, what saddens me is this: I feel terrified that many of these young people are on a collision course with the dissolution of the Jewish people—that is, the destruction of Jewish community and the Jewish future, certainly in the Diaspora.  And to the extent that any work I have done in the past in any manner contributes to this, I am terrified and I repent.

My young friend told me this that he had heard from another young leader among Jews who believe in Yeshua. He is in Israel: “He told me that the craziest thing he sees in the States now is the fact that Believers want to go BACK to Torah. We have evolved, we have new places to worship besides the 'traditional' synagogue, we should do something different as believers.”

In further discussion my friend told me that such people believe the Torah is passé now that Yeshua has come. It’s all been fulfilled. And therefore, people like myself who advocate for a Messianic Jewish return to Torah are sadly misguided, old dinosaurs, who are not hip to the new Torah-free evangelistic thrust winning enthusiasm in some circles.

I am horrified. Grief stricken. Disheartened.

Do you think that the Messiah came so that we would become strangers to the Jewish heritage, and strangers to our own people? Do not doubt that this will happen, things being as they are. It is already happening.

And above all, try thinking about seventy years in advance. I am not asking if your great grandchildren will remember they have Jewish roots. They may, they may not. I am asking will they know themselves to be part of the Jewish community, and the Jewish commmunity a part of themselves?

The answer is No. They will not. And if, God forbid, that does not matter to you, then know this. It matters an awful lot to me. And if that makes me a dinosaur, hear me roar.

Photo at head of blog, By Fourbyfourblazer (Own work) [CC BY 3.0 (http://creativecommons.org/licenses/by/3.0)], via Wikimedia Commons

6 comments on “On Saving A Soul and Losing a People”

Next Post
Karaism, Protestantism, and the Seductive Power of Messianic Jewish Purism »