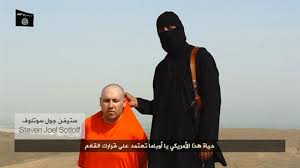 Another American journalist, Steven J. Sotloff,  has been heartlessly beheaded by the agents of ISIS. Having just read about this, my desire is to see the perpetrators and their henchmen bombed into oblivion, imagining them crawling along the desert floor seeking a hole to hide in from the terror that is raining down upon them, and finding none.

Was I being spiritually derelict for harboring such thoughts?  I think not.

There is plenty in the Bible about a longng for God's judgment upon such wicked people. This is not a longing for revenge, it is not a blood lust, but what we might call "justice lust."  And it is right, and beautiful, understandable, and good.

Lest anyone think this some sort of aberrational hangover from the Old Testament, unworthy of those who claim allegiance to "gentle Jesus meek and mild," one should pause to consider, for example, this passage:

When he opened the fifth seal, I saw under the altar the souls of those who had been slain for the word of God and for the witness they had borne. They cried out with a loud voice, “O Sovereign Lord, holy and true, how long before you will judge and avenge our blood on those who dwell on the earth?” Then they were each given a white robe and told to rest a little longer, until the number of their fellow servants and their brothers should be complete, who were to be killed as they themselves had been. When he opened the sixth seal, I looked, and behold, there was a great earthquake, and the sun became black as sackcloth, the full moon became like blood, and the stars of the sky fell to the earth as the fig tree sheds its winter fruit when shaken by a gale. The sky vanished like a scroll that is being rolled up, and every mountain and island was removed from its place. Then the kings of the earth and the great ones and the generals and the rich and the powerful, and everyone, slave and free, hid themselves in the caves and among the rocks of the mountains, calling to the mountains and rocks, “Fall on us and hide us from the face of him who is seated on the throne, and from the wrath of the Lamb, for the great day of their wrath has come, and who can stand?” (Revelation 6:9-17 ESV)

"The wrath of the Lamb," what an arresting phrase!  The One who came to live a sinless life and who died on a Roman gibbet, a despised Jew, naked and apparently powerless before the savage brutality of Rome, the one who came to demonstrate invincible power in manifest weakness, who took the worst that evil can dish out, and triumphed over it all in his resurrection, this one, the Lamb of God, will return to mete out the judgment richly deserved by the truly evil--those who gloried in their ability to get away with it all. There will come a Day when there will be no place to hide. None.

Are we wrong to long for that day?  No more wrong than those who cry out from beneath the throne of God. We do not glory in the doom awaiting the truly wicked. But it is satisfying to know that their unspeakable evil will never be the last word on the matter.

And there will be no place to hide.

For all of us the most colossal struggle is as it was for Jonah, who fled from the presence of God rather than be the agent of God's mercy for the hideous Assyrians, the ideological mentors of ISIS.  Ours is a struggle to find in God the will to wish that even such as these might find the mercy none of us deserve.

Right now, I am with Jonah, fleeing from the presence of a God who would show mercy to such beasts.

Next Post
What Kind of Shul Am I? The Varieties of Messianic Jewish Congregational Expression (Part One) »