Old Ain't Dead: On Valuing and Encouraging the Contributions of Older People 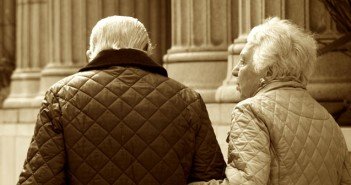 Here at Interfaithfulness, especially through our HaB'er initiative, we are involved in mentoring Jewish and Intermarried families in Jewish life, Yeshua faith, and relationship with God. And families include people of all ages!

But if you think that people beyond a certain age have outlived their usefulness, then don't waste your time reading this because, after all, while you are reading, you are growing older and will sooner or later be useless, with your major contribution being to just stay out of the way.

But if you disagree, and if you think that older folks have much to contribute to the world as a product of their life experience and persepctive, then read on.

Recently I have been reading a wonderful book, Composing a Further

Life: The Age of Active Wisdom,  by Mary Catherine Bateson, now in her seventies,  the Clarence J. Robinson Professor Emerita of Anthropology and English at George Mason University. But that's not the half of it: she is the daughter of Margaret Mead (yes, that Margaret Mead), and Gregory Bateson, two geniuses, and Mary Catherine's intellectual apple doesn't fall far from their tree, except to say that she has a highly developed faith life. And man, can she write!  What a mind. A little bonus, her mother's sister was married to Leo Rosten, Jewish wit, author, Yiddishist and raconteur, so he was her uncle Leo!  And early in her book she speaks of going to Israel as a young woman and learning Hebrew there. And yes, she also speaks Arabic. What a confluence of influences!

If that's not enough, she was also a teaching assistant to seminal psychologist Erik Erikson who postulated eight eras of human development. She explores these eight stages in her book, to which she adds a ninth, which she terms "Adulthood II," an addition necessitated by how medical science and better living conditions have prolonged our years of productive living.

The chart that follow outlines these nine life-stages. For each, there is an issue, a crisis, to be resolve, and for each there is a positive outcome that is desirable, and a negative outcome that results from not having come through the age-related issue successfully. When that happens, if we are aware, we can spend time later in life making up for the deficit. And generally it is a good idea to do so

Having perused this chart, which comes from Dr. Bateson's book, page 79, consider the following issues and questions. If you are "of a certain age," may these points and questions clarify you own issues, and if you are someone who lives with older people, perhaps in your family or congregation, may these issues and questions transform what you expect of them and the support you give them.

Some Points to Ponder

Illustration at the top of this article ©Jeremy Brooks, Creative Commons License, used by permission.

Next Post
On Saving A Soul and Losing a People »