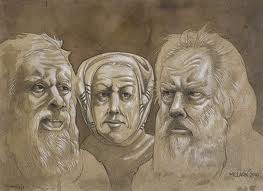 In part one of this little series on Moses' marital life, we considered interfaith conflicts he had with his fiery wife, Tzipporah.  This second study takes place later in his life, when Moses is already established as the leader of Israel. He marries again.

This time he marries a Cushite, whom we would term an Ethiopian.  In his book From Every People and Nation: A Biblical Theology of Race, Daniel Hays writes that Cush "is used regularly to refer to the area south of Egypt, and above the cataracts on the Nile, where a Black African civilization flourished for over two thousand years. Thus it is quite clear that Moses marries a Black African woman" (71).

12 Miriam and Aaron spoke against Moses because of the Cushite woman whom he had married, for he had married a Cushite woman. 2 And they said, “Has the Lord indeed spoken only through Moses? Has he not spoken through us also?” And the Lord heard it. 3 Now the man Moses was very meek, more than all people who were on the face of the earth. 4 And suddenly the Lord said to Moses and to Aaron and Miriam, “Come out, you three, to the tent of meeting.” And the three of them came out. 5 And the Lord came down in a pillar of cloud and stood at the entrance of the tent and called Aaron and Miriam, and they both came forward. 6 And he said, “Hear my words: If there is a prophet among you, I the Lord make myself known to him in a vision; I speak with him in a dream. 7 Not so with my servant Moses. He is faithful in all my house. 8 With him I speak mouth to mouth, clearly, and not in riddles, and he beholds the form of the Lord. Why then were you not afraid to speak against my servant Moses?” 9 And the anger of the Lord was kindled against them, and he departed.

10 When the cloud removed from over the tent, behold, Miriam was leprous,[a] like snow. And Aaron turned toward Miriam, and behold, she was leprous. 11 And Aaron said to Moses, “Oh, my lord, do not punish us[b] because we have done foolishly and have sinned. 12 Let her not be as one dead, whose flesh is half eaten away when he comes out of his mother's womb.” 13 And Moses cried to the Lord, “O God, please heal her—please.” 14 But the Lord said to Moses, “If her father had but spit in her face, should she not be shamed seven days? Let her be shut outside the camp seven days, and after that she may be brought in again.” 15 So Miriam was shut outside the camp seven days, and the people did not set out on the march till Miriam was brought in again. 16 After that the people set out from Hazeroth, and camped in the wilderness of Paran.

A few matters to note for our instruction.

First, from God’s point of view, it is not the insult to the unnamed Cushite woman that is primary. In fact, this is not even mentioned. Rather it is the insult against Moses and his unique intimacy with God, with Aaron and Miriam griping that he was no more a big shot than they are. God disagreed, and strongly!

Third, Aaron and Miriam’s murmurings against Moses should not simply be seen as being based on his recent marriage and their feelings about it. This is crucial to remember in family relationships. Often, things are not as they appear, and the stated reasons for an inflamed situation are seldom simply as stated.

There are many lessons one could draw from this story.  Today we restrict ourselves to those lessons that apply to interfaith marriages, whether or not these marriages are interracial.

First, our society seems blind to the fact that marriage is a family affair and not a personal affair. When two people marry, they thereby join together their families of origin. When Max marries Tiffany, Max’s parents become inlaws to Tiffany and to her parents, and Tiffany’s parents, inlaws to Max and his parents.  Jewish culture even has a special word for the new relationship  between Max’s parents and Tiffany’s parents, [to be machetunnim to each other] for which English lacks a special word. Spanish speaks of conseugros to describe the same phenomenon. But in today's “me-culture” this idea seems quaint.  It’s not quaint: it is reality. When Max and Tiffany get married, their families get married to each other too!

Therefore, what was happening between Moses and that Cushite woman was not simply his business or her business: it was a family affair. Even though we can find fault with how Miriam and Aaron responded, they did have a right to an opinion and engagement with the situation. This new woman is also their new relative.

Too often couples who marry act as though what they do, who they marry, what kind of home they set up is nobody else’s business but their own. Speaking or thinking this way doesn’t make it so. The fact is that marriage is a family affair.

Second, old resentments and wounded feelings can contaminate and trigger how family members respond within and to a new marriage. It seems that at the bottom of it all, what was really irritating Miriam and Aaron was the unique status and power wielded by their kid brother. Similarly, a disapproved marriage can be the trigger for all kinds of unresolved feelings. This being the case, people will often react in a manner entirely out of proportion to the presenting situation itself. In such cases, it is alright and normal to be shocked: but don’t be surprised.

Third, much grief would be averted, and even divine displeasure, if people would remember to deal respectfully with each other. What earned her God’s sharp displeasure was Miriam’s [and Aaron’s] disrespect of their brother. Much grief, and later-to-be-regretted words and actions can be averted if the parties involved will remember to treat each other with respect. Sadly, this is often lacking in our day, being more typical of a previous generation than our own. Still it is a standard to be aspired to: to learn to always speak and behave respectfully to and of one another. Apologies do not undo all damage, and once a word is launched, it will do damage that cannot be averted.

A midrashic tale delivers a lesson which in-laws, spouses, and machetunnim dare not forget. Here it is:

The tongue is compared to an arrow. Why? Because if a person draws a sword to kill his fellow man, the intended victim can beg mercy and the attacker can change his mind and return the sword to its sheath. But an arrow, once it has been shot and begun its journey, even if the shooter wants to stop it, he cannot (Midrash Tehillim 120, ed. Buber, p. 503).

Miriam's and Aaron's ill-conceived words cost them dearly, bringing the sharp rebuke of God. Oftentimes, in intermarriage situations, disappointed or displeased relatives will say things that are disprespectful and hurtful, and God hears.

My father and teacher, of Blessed Memory, was the only son of an observant Eastern European Orthodox Jewish family, an immigrant who came to America in 1912.  My mother, of Blessed Memory, was an Italian imigrant and a convert to Orthodox Judaism in the early 1930's. Nearly fifty years after they married, I sat in the hearse on the day we buried my father and my mother told me she had never felt accepted by his family, despite all of that.   About 25 years later I asked my cousin if this were true, as he grew up in the house with my father's mother, father, and sister. My cousin said, "Oh sure, we referred to her as his naarishkeit [foolishness]." Painful words. Even now.

My father's family were not bad people, no more than Miriam and Aaron were bad people. But in the heat of disappointment, disapproval, or in Miriam and Aaron's case, jealousy and judgmentalism, even good people can say say things that ought never to be uttered--arrows that once unleashed cannot be recalled.

Let's learn that lesson for our interfaith marriage situations. It is the lesson that Aretha Franklin taught us as well: R-E-S-P-E-C-T. Don't forget it.

Previous Post
« A Book Review - If I'm Jewish and You're Christian, What Are the Kids? [Part Two]