This post comes as a brief interruption of our current discussion of intermarriage to address an issue which has some traction in the Messianic Jewish movement, and which drives me a little crazy, which in my case, is a short drive. Please indulge me, and if this post doesn't touch on issues you care about, wait for the next one, coming up in two days, back to the subject of intermarriage.

This whole preoccupation with avoiding "the pagan roots of Christmas" is based on what is termed the genetic fallacy--that something should and may be fairly evaluated on the basis of its origin.  This is FALSE.  Things should be evaluated on the basis of their use, not their origin.  The Star Spangled Banner's melody was taken from a pagan themed song which said "entwined (is) the myrtle of Venus with Bacchus' vine." And Wikipedia reminds us that "the song (titled 'To Anacreon in Heaven'), through its bawdy lyrics, gained popularity in London and elsewhere."  Now obviously we can't continue to sing the Star Spangled Banner because of its pagan roots.  Then, if we practice the genetic fallacy, we should, like Jehovah's Witnesses, cease having birthday parties, because the only birthdays celebrated in the Bible are those of pagan kings, Pharaoh and Herod.

And here's another refutation. Most of us are big on celebrating the seventh day sabbath. But suppose we ran across scholarly arguments "proving" that the world began on a Tuesday, and that therefore the seventh day would be a Monday.  Would that rightly result in people bailing out on Saturday as shabbat because it wasn't biblical?  Would that rightly result in groups splitting off and beginning to celebrate the true and biblical seventh day sabbath, from midnight Sunday to midnight Monday?  I sure hope not. I hope we all agree that the key here is that the sabbath should be celebrated, NOT that if you've got the day wrong nothing else counts. 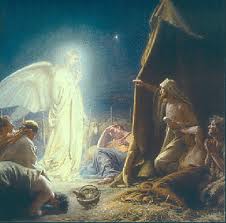 [This post originally dwelt on another blog of mine, under another name, so if it looks familiar, it is :-)]

33 comments on “Let's Not Get Strange About Christmas, Shall We?”

Previous Post
« Intermarriage and Faith in Jesus: Is it Good For the Jews?