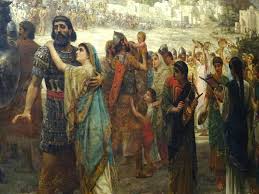 This is an edited version of a sermon presented on Shabbat Chukkat, a time when we read the story of an unlikely biblical hero who has much to teach us about transformative change.

I am here today to recruit some of you to a transformed life, a life of strange and wonderful intimacy with God, a life of power, of love, and of a sound mind.

But long experience with the people of God tells me that there are generally three kinds of people I am addressing:

The eleventh chapter of Hebrews lists the kind of people for whom God does these wonders. Here’s some of them.

Notice what losers they are in the eyes of the world.

·      Avraham – 75 years old, leaves his family to go who knows where following a God nobody can see. Promised descendans as numerous as the sand on the seashore and the stars in the sky. But he is 99 before son number one is born.

·      Isaac -  almost sacrificed by his father, kind of weak and clueless, outmaneuvered in his old age by his wife and her compliant son, Jacob.

·      Jacob – destined by God, but still, fooled his Dad and his brother and then got out of town running for his life, only to be skunked by his brother in law for twenty years.

·      Joseph – the kid brother, betrayed by his siblings, ending up a slave living in exile

·      Moses – We first meet him, a baby floating in a basket, later a fugitive from Pharaoh’s wrath, forty years doing idiot’s work in Midian tending sheep, and not even his own sheep, but those or his father in law!

·      Gideon, the least in his house, the least clan in Israel, hiding in pit threshing wheat because his nation is dominated by the Ammonites who will take the wheat from him. And when theAngel of the Lord encounters him we learn much about Gideon’s self image: “12 The angel of ADONAI appeared to him and said to him: "You valiant hero! ADONAI is with you!" 13 "Excuse me, sir," answered Gid'on, "but if ADONAI is with us, then why is all this happening to us? And where are all his miracles our ancestors told us about when they said, 'Didn't ADONAI bring us up from Egypt?' For now ADONAI has abandoned us and handed us over to Midyan." 14 ADONAI turned to him and said, "Go in this strength of yours and save Isra'el from the hands of Midyan. Haven't I sent you?"  15 But Gid'on answered him, "Forgive me, my Lord, but with what am I to save Isra'el? Why, my family is the poorest in M'nasheh, and I'm the youngest person in my father's house!"

·      Barak – too chicken to go to battle unless the prophetess Deborah went with him—she told him that as a result, God would deal the death blow to his enemy through a woman and not himself—this was a humiliation.

·      Samson – skirt chaser, spoiled child, immature adult, self-centered, ends up forfeiting his great strength and office as a judge because he can’t resist the pleading of his wife. Then he ends up as John Milton puts it, “eyeless in Gaza, grinding at a mill.” He is blinded by his enemies, grinding wheat in a mill like an ox, that is when he isn’t brought into their pagan temple of Dagon for the entertainment of the Philistines.

·      David, the youngest of seven sons, a dreamer not to be taken seriously, later, an adulterer and murderer.

These and others are those whom the writer to the Hebrews speaks of as those. . .

who, through trusting, conquered kingdoms, worked righteousness, received what was promised, shut the mouths of lions, quenched the power of fire, escaped the edge of the sword, had their weakness turned to strength, grew mighty in battle and routed foreign armies. . . . People of whom the world was not worthy!

Every one of them were considered losers in their day, at least for a while. These were judged pathetic people, like you, and like me.  But these were people whom God used gloriously. Like you and like me.

Jephthah: From Nobody to Nobleman

Jephthah, or in Hebrew, Yiftach, is the subject of today’s haftarah. He is also named in this list of heroes.  Let’s look at him for a while. There are lessons to be learned.

He had been driven away from his family by his half-brothers who despised him because he was the son of a prostitute and not of their mother.

Banished from Gilead, where apparently nobody thought to stand up for his defense, he ends up in the land of Tob (which means good) but it was a bad place to be—exiled in disgrace. Still, God can turn the bad places in our lives into good ones.  That’s what happens with Yiftach, but by a rather strange set of circumstances.

He becomes something of a gang leader.  He specializes in attacking and plundering the lands of Israel's enemies.

His life takes an unexpected turn when the elders from Gilead send for him and beg him to come back and help them fight off the Ammonites, who have occupied their land. They recognize his leadership capacities, and are well aware of his reputation. Now they need his help.

Yiftach questions the elders' motives, saying, "Didn't you hate me and drive me from my father's house?  Why do you come to me now, when you're in trouble?" (Judges 11:7).  However, the leaders of Gilead give him an offer he can’t refuse: "Come with us to fight the Ammonites, and you will be our head over all who live in Gilead" (Judges 11:8).

Yiftach is no dope. He requires of them to articulate clearly the nature of their promise to him—to go on record for why they needed him. Then he has them repeat the offer and its specifics. This is the equivalent of having someone put things in writing when they come to you for something or hire you.  Finally, he ratifies these things with them ceremonially, making the people and God Himself witnesses of the agreement that was being made.

Then he goes into action.

First he tries to resolve the problem using diplomacy. But the King of the Ammonites falsely accuses Israel of having stolen their land centuries earlier, Clearly, this king is looking for a fight.  YIftach responds that the Israelites had taken no land from the people of Ammon, but from other peoples around them who had been hostile to them. He is clear on his history, he knows the facts cold, and he simply cannot be bamboozled.

The king of the Ammonites is not interested. Then notice what happens.

This is significant because for us now, living on this side of the resurrection, even more than for Yiftach, when we are doing the work which God has called us to do, the Spirit of God will come upon us. This is not always dramatic, sometimes you will feel little if anything. Feelings is not what it is about. When the Spirit comes upon you at such times it about one thing: equipping you to do the work God has called you to do.

As I said earlier, “I am here today to recruit some of you to a transformed life, a life of strange and wonderful intimacy with God, a life of power, of love, and of a sound mind.” I am here to recruit you to a life of availablilty to God, of abandonment to his service, of being filled with His Spirit, of taking risks, and more than that, like Yiftach, taking your place as God’s available servant. ARE YOU AVAILABLE?  Or are you playing it safe?

Again, as I said earlier, there are three ways people respond to the kind of opportunity. The first two are these: 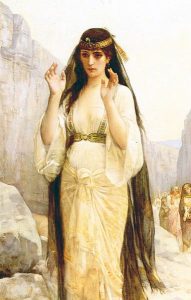 He tells God that if he will but give him victory over the Ammonites,  will sacrifice to him whatever first comes out of his house to greet him.  So he leads an attack on the Ammonites and his attack is successful, resulting in the devastation of "twenty towns from Aroer to the vicinity of Minnith, as far as Abel Keramim" (Judges 11:33).  But the first thing to come out of his house to greet him after the victory is his young daughter.

Some people believe that he did not have to offer her up as a blood sacrifice, but rather that because of his vow, she never could marry and had to live as some sort of servant to God’s presence in the Tabernacle all the days of her life.

Yiftach got too juiced up on his own juices and made a very stupid mistake. When God raises us to positions of power, when we sense he is using us, this is always a danger. We get cute.

Lessons in Spiritual and Social Transformation

Beyond this sad story, we should not miss how Yiftach’s career teaches us important lessons for our own lives.

Yiftach means “he will open.” I want to leave you today with two challenges growing out of his name.

So here is my challenge for you.  Are you closed and shut down? Or are you open?

Open up to the new possibilities inherent in the extraordinary dynamics unleashed through Yeshua's death, his resurrection, and his sending forth of His Spirit to inhabit our lives and empower our actions.

If you want to know more, get in touch.