In Praise of Being Wrong 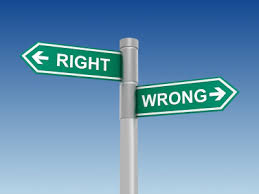 I disagree. In fact, In some matters I will give to other people the right to be right, and I will accept the label “wrong,” because I like my “wrong” better than their “right.”  In fact, I think God does to.

There are people who will argue from Scripture that “we are not under the Law” any more, and that therefore, for example, Yeshua believing Jews can go ahead and eat ham sandwiches . . . with milk. . .  on Yom Kippur . . .  with full impunity, and that the principle of free choice trumps any imperative to live a Jewish life.

Such people will tell me, you, and whoever else will listen, “It’s alright if you want to keep kosher, just as long as you don’t require this of other people, or tell them they should too.” Again, we live in a day when preserving free choice is viewed as a non-negotiable and Torah living—for Jews—expendable, or as one prominent Bible teacher renders it, “inoperative.” And such people will skillfully present “biblical arguments” (with which I disagree) in support of their position.

To such people I will say this: “So you want to prove me wrong and you right? O.K. I hereby give you the right to be right and, if you prefer, I’m wrong.” Judged by their hermeneutic I am wrong, and there is no way I can be right if I play by their rules.

But to them I will also say that I like my wrong better than their right because of the results that come from my interpretation versus theirs. Do they actually believe that Yeshua came into the world so that Jews could eat a ham sandwich? That the King of the Jews came into the world to render the Torah of Moses optional? That he came so that Jews who embraced the Messiah of Israel in faith could in good conscience live a life indistinguishable from the average Gentile Christian? In other words, did the Messiah of Israel come to abolish the Jewish way of life? Are you kidding me?

I like my wrong better than their right.  In my wrongness I believe it honors the God of Israel and his Messiah far more when the impact of the Messiah’s coming is that Jews return to the paths of Torah from which we so easily stray. I believe that one of the marks of a right understanding of the Messiah is believing that he came to bring the Jewish people closer to God and to bring us back to the Jewish way of life with fullness of joy in the power of the Spirit.

And if in this I am “wrong,” I can live with that.

I just cannot live by some other people’s “right.”