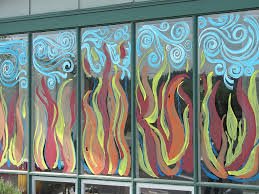 Repeatedly Scripture portrays the coming of the Spirit as a transformational spiritual dynamism. This was foreshadowed in the Older Testament, and it is surprising that so many people don’t notice. For example, right after Samuel anoints a bewildered Saul the son of Kish as the first King of Israel, he tells him where to go and mentions some people he will meet along the way. But notice in the following passage the experiential dimension of the coming of the Spirit, and notice how this results in Spirit-inspired speech:

You will meet a group of prophets coming down from the high place, preceded by lutes, tambourines, flutes and lyres; and they will be prophesying. 6 Then the Spirit of Adonai will fall on you; you will prophesy with them and be turned into another man! 7 When these signs come over you, just do whatever you feel like doing, because God is with you. 8 Then you are to go down ahead of me to Gilgal, and there I will come down to you to offer burnt offerings and present sacrifices as peace offerings. Wait there seven days, until I come to you and tell you what to do.” 9 As it happened, as soon as he had turned his back to leave Sh’mu’el, God gave him another heart; and all those signs took place that day  (1 Sa 9:5-8, emphasis added).

Moses Attests to This Reality

Earlier, something similar happened while Israel was in the wilderness. Moses prayed a prayer at that time which we are seeing fulfilled in our day. In Bamidbar/Numbers 11, Moses is feeling the need to have a cadre of people who can share with him the burdens of leading Israel in the wilderness. God answers this need by directing him to select seventy leaders whom Adonai will equip to help lead the people. Notice what is said here about the Ruach haKodesh, and notice the wish that Moses expresses:

Then he collected seventy of the leaders of the people and placed them all around the tent. 25 Adonai came down in the cloud, spoke to him, took some of the Spirit that was on him and put it on the seventy leaders. When the Spirit came to rest on them, they prophesied — then but not afterwards.

26 There were two men who stayed in the camp, one named Eldad and the other Medad, and the Spirit came to rest on them. They were among those listed to go out to the tent, but they hadn’t done so, and they prophesied in the camp. 27 A young man ran and told Moshe, “Eldad and Medad are prophesying in the camp!” 28 Y’hoshua, the son of Nun, who from his youth up had been Moshe’s assistant, answered, “My lord, Moshe, stop them!” 29 But Moshe replied, “Are you so zealous to protect me? I wish all of Adonai’s people were prophets! I wish Adonai would put his Spirit on all of them!”

We are living in the day when God is responding to this wish, this prayer of Moses. This is why, quoting from the Prophet Joel, Peter says this on the Day of Pentecost when the crowds assume the disciples are all drunk because they see them strongly affected by the Spirit, and speaking in languages they had never learned:

15 “These people aren’t drunk, as you suppose — it’s only nine in the morning. 16 No, this is what was spoken about through the prophet Yo’el:

Yeshua called this experienced reality of the Spirit  “living water,” and which is the opposite of stagnant water, but rather, water on the move. He further says, “If anyone is thirsty, let him keep coming to me and drinking! Whoever puts his trust in me, as the Scripture says, rivers of living water will flow from his inmost being!”  Notice what he says about the scope of this promise. It is for whoever trusts in him, and it is no trickle of the Spirit, no shpritz. It is rivers of living water flowing out of our inmost being. Does it get any better than this? And if this is not an experiential reality, then I don’t know what is!

Peter amplifies the universal availability of this resource for all of Yeshua’s people when he says, “Turn from sin, return to God, and each of you be immersed on the authority of Yeshua the Messiah into forgiveness of your sins, and you will receive the gift of the Ruach HaKodesh! For the promise is for you, for your children, and for those far away — as many as Adonai our God may call!” (Acts 2:37-38).

Notice—for you, for your children, for those who are far away, as many as Adonai our God may call. So this is not just an experienced reality: it is universal for all of Yeshua’s people!

Peter calls this coming of the Spirit “the promise,”  a metonymy meaning not the promise itself, but the fulfillment or realization of what was promised: in this case, the coming of the Spirit. This was an OLD promise, of which the prophets spoke extensively. It is not only a fulfilled promise, though. Yeshua refers to the Presence of the Spirit as “a gift,” again through Luke’s writings: “If you, even though you are bad, know how to give your children gifts that are good, how much more will the Father keep giving the Ruach HaKodesh from heaven to those who keep asking him!” (Luke 11:13).

So we are talking about a promise, a gift, something given to all of Yeshua’s people, something for which we should be continually asking—that these springs of living water would be perennially refreshed in us.

Paul Chimes In: The Experienced Presence of the Spirit - Don't Leave Home Without It

Scripture makes it clear that without this dynamism, something vital is missing. This must be what happened in Acts 19, when Paul arrived in Ephesus and be met twelve disciples. Notice the question Paul asks them, and ask yourself, “Why did he ask that unusual question?”

While Apollos was in Corinth, Sha’ul completed his travels through the inland country and arrived at Ephesus, where he found a few talmidim. 2 He asked them, “Did you receive the Ruach HaKodesh when you came to trust?” “No,” they said to him, “we have never even heard that there is such a thing as the Ruach HaKodesh.” 3 “In that case,” he said, “into what were you immersed?” “The immersion of Yochanan,” they answered. 4 Sha’ul said, “Yochanan practiced an immersion in connection with turning from sin to God; but he told the people to put their trust in the one who would come after him, that is, in Yeshua.” 5 On hearing this, they were immersed into the name of the Lord Yeshua; 6 and when Sha’ul placed his hands on them, the Ruach HaKodesh came upon them; so that they began speaking in tongues and prophesying. 7 In all, there were about twelve of these men.

Apparently, Paul noticed there was something about these disciples that didn’t quite ring true—they seemed to be missing something—that is, the Ruach HaKodesh. Notice too that the coming of the Spirit is connected with being immersed into the Name, and thus the accomplished work, of Yeshua the Messiah. Finally, notice that Paul considers the coming of the Spirit to be crucial—not an added frill but standard equipment!  That is why he immerses them and lays hands on them so that “the Ruach HaKodesh came upon them; so that they began speaking in tongues and prophesying.”: Again, with the coming of the Spirit there is a transfiormation of the speaking faculties: prophetic speech—weighty words from God—and speaking in tongues.

Some will argue that this is a narrative passage and that therefore one cannot draw authoritative teaching from it. Well, this is a problematic argument because this is precisely what God does in both Testaments, instructing his people through narrative stories. Paul himself will say that “16 All Scripture is God-breathed and is valuable for teaching the truth, convicting of sin, correcting faults and training in right living; 17 thus anyone who belongs to God may be fully equipped for every good work” (2 Timothy 3:16-17).

Besides this, in his letters, Paul refers to the coming of the Spirit as an experienced reality. As but one example, consider Galatians 3:2: “I want to know from you just this one thing: did you receive the Spirit by legalistic observance of Torah commands or by trusting in what you heard and being faithful to it?” He is referring to receiving the Spirit as something he could point back to as an event in their lives. In his Second Letter to the Corinthians, he uses a number of experiential terms in a very rich manner to describe this reality: “ Moreover, it is God who sets both us and you in firm union with the Messiah; he has anointed us, put his seal on us, and given us his Spirit in our hearts as a guarantee for the future”: (2 Cor 2:1-22). When you have a guarantee, you already have something which points toward something greater you will have later. The Greek is arabon which is also translated “earnest” or “down-payment,” and my point is that this term refers to something one will know that he or she already has, and having it already gives one assurance of the greater something one will have in the future.

However, we must be sure to avoid a fundamental mistake often made by others: we must not react passively, taking these realities for granted. Just assuming they come with the package. No. Scripture admonishes us to be active seekers of the realities we have described here, and to be radically engaged with them. That is why Yeshua can say, If anyone is thirsty, let him come to me and drink,  and “How much more will the heavenly Father give the Holy Spirit to those who ask him?. And on the Day of Pentecost, the crowds realize that all of this calls for a response on their part, which is why they say

“Brothers what shall we do?  (So there is here an expressed desire) to which Peter responds with a call to action: “ Repent, be immersed, in the name of Yeshua of Nazareth, and you shall receive gift of the Holy Spirit (which was demonstrable).”

It should be clear now that we are living in times of transition, that through the work of Yeshua, the Age to Come has broken through, that we are living in a time when the Age to Come and the present age are overlapping, and that this is indeed the Age of the Spirit, who is universally available for all of Yeshua’s people who are prepared to be authentically engaged with the Spirit which he has poured out from his seat of power in the heavenlies.

You may see an abbreviated version of this material in one of our Red Door Diaries.