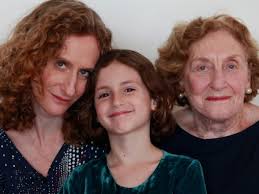 It's easy to wreck or at least damage a congregation or a movement. Today I will tell you one way to do it, which also provides a key to generational health, for those who will use the key instead of ignoring it. So let me tell you a story.

Tom felt that Evelyn was just not up to the musical demands he wanted to put on her, with the more contemporary and demanding music he wanted to introduce in the congregation. So one day he told someone, "I'm looking to get her out of that position." The problem was, he was overheard by someone in Evelyn's generation. Word spread as fast as gnats in a swamp, and the word was out: "Tom is no friend of older people. Look what he's doing to poor Evelyn." Tom still had his job. But really, he was done for.

The Bible and Jewish religious culture are highly invested in promoting appropriate relationships between generations, guiding and enhancing teaching, learning, respect, and responsibility. And you can determine how healthy or unhealthy families and communities are by assessing how the generations learn from each other, teach each other, respect each other, and distribute responsibility. And you just cannot and will not have a healthy congregation or family without good "generelations,"  relationships between the generations. In Interfaithfulnes we call these "generelationships" or "generelations." And the better those relationships are, the better things will be for everyone.  Good generelationships enhance functionality, satisfaction and maturity. They reflect the image of God , and help us to think and behave rightly toward God, people, and the created world. In other words, if we are going to pursue tikkun olam, repair of a broken world, we had better pursue tikkun ha-dorot--repair of the generations and of the relationship between them.

You may think you already know these things, but think again. It is my observation that in the West, almost no one pays due attention to this important area of relationship and communal health.

In the religious communal context, while the natural and dominant assumption is that the older generation will teach the younger, which is why elders are called elders, this model also recognizes that the younger generation often has something to teach the older, as Paul notes in writing to Timothy, “Let no one despise you for your youth, but set the believers an example in speech, in conduct, in love, in faith, in purity” (1 Tim 4:12), and in Titus 2:2, “Teach the older men to be temperate, worthy of respect, self-controlled, and sound in faith, in love and in endurance.” Do the different generations teach and truly listen to each other in your congregation? Really? Or do the elders assume the young folks don't know anything yet, or the young folks imagine that the older people were O.K. in their time, but are now an obstruction to progress?  As yourself . . . and answer.

When we refer to the kind of teaching that needs to happen, we especially mean the transference of empowerment in knowledge, wisdom, and understanding contributing to spiritual growth and usefulness.  “Knowledge, wisdom, and understanding” is “da’at, binah, v’haskel” as found in the fourth benediction of the daily Amidah. These represent the kind of empowerment we need from God Himself, which comes through those whom God uses to empower us and build us up. And this is the kind of empowerment we should deliver to others, whatever their generation or our own.

And while teachers are responsible to effectively teach what is true, they can only be effective if those they are teaching reallay want to learn and thing that their teacher has something of value to offer. Sadly, these attitudes are often undeveloped or missing entirely.

Respect is a huge concern in Jewish religious culture. The term is “kavod,” related to the root connoting “weight, substantiality.” In our tradition we read this:

The honor expressed in good generelationships needs to flow in both directions, both toward the younger generation, and toward the older. So it is that we read at the end of the Book of Malachi that the messenger announcing the coming of Messiah,   “will turn the hearts of fathers to their children and the hearts of children to their fathers, lest I come and strike the land with a decree of utter destruction,” with these words echoed the Gospel According to Luke and applied to John the Baptist, a.k.a. Yochanan ha-Matbil, “he will go before him in the spirit and power of Elijah, to turn the hearts of the fathers to the children, and the disobedient to the wisdom of the just, to make ready for the Lord a people prepared.” Honor flowing from the older generation(s) to the younger, and from the younger to the older is a sign of the Presence of the Kingdom, while the absence of such honor proves that the Kingdom has not yet arrived or is not being taken seriously.

Growth in responsible living is a non-negotiable measure of maturity, as irresponsible living is a badge of immaturity. Therefore, within the confines of their respective roles,  we  may productively guage the maturity of young and old and male and female in our contexts by how each handles their respective responsibilities with regard to tasks, the jobs they should be doing, and relationships, he way they respond to and treat others. Good teaching, good learning, and respect are evidenced when people behave responsibly.

So let's consider some applications of generelational wisdom:

1.    In our various working groups, we at Interfaithfulness measure our communal  health and fruitfulness by teaching, learning, respect and responsibility. We will seek to also advance these values in the lives of those whom we influence.

2.     Good generelations are imperative among those who work or or live together or who are part of extended relational units such as families. While most people are careful in their relationships with peers, few pay proper attention to how they relate to other generations.

3.     Relationships with prior or succeeding generations call for generation specific skills and therefore require training and skills. At Interfaithfulness, this is one of our areas of contribution and concentration, especially as we counsel people at the interesection of the Christian and Jewish worlds, where relationship can grow toxic due to old tensions and negative perceptions

4.     Groups, families, and organizations of all kinds will benefit or suffer depending upon their generelational skills and awareness.

So how is it with you? Your family? Your congregation?  How good are your generationshsips as evidenced in teaching, learning, respect and responsibility. What are you going to do to improve things, and if you don't, what might it cost you?

Previous Post
« SURPRISE! You Can Believe in Yeshua and Not Know God

Next Post
Everlasting Love: The Continuing Election of The Jewish People »