Did Jesus Come So Jews Could Eat a Cheeseburger? 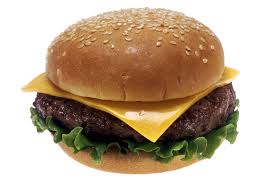 Would Jesus eat a cheeseburger?  Instead of the loaves and fishes, would he just as readily have multiplied ham sandwiches to feed the multitudes?  Some people would say, "Sure!  Jesus himself declared everything to be kosher!"  I am going to create a crisis in this posting for Messianic Jews who think they have Yeshua's license to eat whatever looks good to them, because as the song says, "It ain't necessarily so."  In fact, Daniel Boyarin says such an interpretation is dead wrong. Jesus kept kosher and never taught otherwise!

The chapter on which many Messianic Jews place their cheeseburgers is Mark chapter seven. After giving you that text, I will add six points Daniel Boyarin raises which show that Jesus was actually a Torah purist, and not someone saying, "That was then, but now the rules have changed!"  Here is the passage.

Now when the Pharisees gathered to him, with some of the scribes who had come from Jerusalem, they saw that some of his disciples ate with hands that were defiled, that is, unwashed. (For the Pharisees and all the Jews do not eat unless they wash their hands properly, holding to the tradition of the elders, and when they come from the marketplace, they do not eat unless they wash. And there are many other traditions that they observe, such as the washing of cups and pots and copper vessels and dining couches.) And the Pharisees and the scribes asked him, “Why do your disciples not walk according to the tradition of the elders, but eat with defiled hands?” And he said to them, “Well did Isaiah prophesy of you hypocrites, as it is written,

“‘This people honors me with their lips,

but their heart is far from me;

in vain do they worship me,

teaching as doctrines the commandments of men.’

You leave the commandment of God and hold to the tradition of men.”

And he said to them, “You have a fine way of rejecting the commandment of God in order to establish your tradition! For Moses said, ‘Honor your father and your mother’; and, ‘Whoever reviles father or mother must surely die.’ But you say, ‘If a man tells his father or his mother, “Whatever you would have gained from me is Corban”’ (that is, given to God)—then you no longer permit him to do anything for his father or mother, thus making void the word of God by your tradition that you have handed down. And many such things you do.”

And he called the people to him again and said to them, “Hear me, all of you, and understand: There is nothing outside a person that by going into him can defile him, but the things that come out of a person are what defile him.” And when he had entered the house and left the people, his disciples asked him about the parable. And he said to them,“Then are you also without understanding? Do you not see that whatever goes into a person from outside cannot defile him, since it enters not his heart but his stomach, and is expelled?” (Thus he declared all foods clean.) And he said, “What comes out of a person is what defiles him. For from within, out of the heart of man, come evil thoughts, sexual immorality, theft, murder, adultery, coveting, wickedness, deceit, sensuality, envy, slander, pride, foolishness. All these evil things come from within, and they defile a person.”

In order to understand what is going on here, we need to take a side trip for a moment . . . to a Jewish cemetery.  When Jews go to the cemetery for a burial, it is typical that the people there will themselves throw dirt into the grave, to help bury their deceased loved one. But there is one kind of Jew who does not do this. In fact he/she is likely not to go to the cemetery at all, and if he/she does, he/she will stay on the road and not walk over the graves, or in some cases, go within six feet of a grave. Why is this? It is because he/she is a Cohen, a descendant of the priests of Israel, and priests, who officiated at the Temple, needed to avoid becoming defiled by contact with the dead. When one became defiled, one could not enter the Temple area without going through a time of ritual purification, and out of respect for their exalted office, priests would avoid this defilement altogether. Even though the Temple no longer stands, members of priestly families still avoid contamination by the dead, except in the case of burying their immediate family members. In Bible times, in addition to contact with the dead, there was generally only one other way to become defiled, or impure: that was through secretions from the body: semen, a flow of blood [in the case of a woman], or a gonorrhea discharge. None of this was about cleanliness, but about access. One could only have access to the Temple if one was in a pure or undefiled state. Then one was qualified to go. But if the person had been in touch with the dead, or had a bodily discharge such as I have described, he or she was disqualified, or impure. The term unclean is sometimes used, but is misleading because this has nothing to do with cleanliness, disease, or anything like that. It has to do with access to the holy place: are you undefiled/pure or are you defiled/impure? That was the question.

In addtion to the categories of clean and unclean, Judaism has another set of categories applying to foods: Kosher or non kosher or to state it differently, permitted (kosher) or forbidden (non-kosher, commonly called treife).  Briefly, among the forbidden foods were animals that do not chew their cud like pigs and rabbits, birds of prey, and sea creatures lacking both fins and scales. To be kosher, meat had to be slaughtered in special humane ways, and milk and meat products had to be eaten separately and not at the same meal (thus, no cheeseburgers)! Those were the laws in Bible days, and they remain in force today for all observant Jews.

So we see here two pairs of binary categories that influenced Jewish life. FIrst, clean/pure and unclean/defiled--applying to contact with death and/or bodily discharges, and second,  kosher/permitted and treife/non-kosher--applying to what animals were permitted or forbidden for consumption.

Returning to Mark seven then, what categories inform Yeshua's dispute with the Pharisees and Scribes in this story?  Clean/pure versus defiled!  The question of what is kosher on non-kosher is nowhere in the picture!  (I see some people stopping their eating mid-cheeseburger)! Let's look a bit more at what is going on here.

In his book, The Jewish Gospels: The Story of the Jewish Christ, Daniel Boyarin tells us that the Pharisees and Scribes of Yeshua's day were innovators. Among their innovations was their taking categories and rituals that applied to the Temple and extending these into the lives of the average Jew wherever he or she lived. They also tended to embellish the laws of Torah, extending them to new situations, and expanding their application in ordinary life. At least some of their changes may have been innovations developed in the 70 years of Babylonian exile, while the Jews who remained in Palestine, such as the Galilean Jews, maintained older standards of practice. Boyarin goes on present Yeshua as a champion of Torah in our Mark seven situation, arguing against Pharisaic innovations: "Jesus' Judaism was a conservative reaction against some radical innovations in the Law stemming from the Pharisses and Scribes of Jerusalem."  And he adds that "Jesus was fighting not against Judaism but within it."

Boyarin has some other surprises for us too, among them, the following:

This brings us to kosher laws. Am I telling my Jewish readers, especially my Messianic Jewish readers, that they must return to eating kosher? No!  Who am I to go around telling you what to eat?  But I am saying this: "If you're going to eat that cheeseburger don't say 'Yeshua said it's cool.'"

No he didn't, and just maybe, it's not cool at all!

10 comments on “Did Jesus Come So Jews Could Eat a Cheeseburger?”

Next Post
Daniel Boyarin Answers My Aunt, And Maybe Yours: Is Jesus a Goyishe Fraud? »