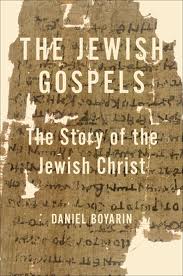 Daniel Boyarin is the Taubman Professor of Talmudic Culture and Rhetoric at the University of California, Berkeley.  He is one of the greatest talmudists in the world, and has written provocatively about reconsidering the assumption that Judaism and Christianity are antithetical religions.  His Borderlines: The Partition of Judaeo-Christianity is fascinating in this regard, but reading it will be quite daunting for most people.  Fortunately, Boyarin himself  has come to our aid, writing a popular book that explains some of his critical core findings. The Jewish Gospels: The Story of the Jewish Christ is that book.  In the world of Jewish and Christian assumptions and Jewish/Christian relations this book is a game-changer. I guarantee that if you read it, you are sure to tell someone else, "You've got to read this book!"

Let me share with you four game-changing ideas from this book that rewrite the script Christians and Jews are used to playing out.

First Game-Changing Idea -  Christianity is Kosher -  Jews in the First Century struggled to discern the will of God for non-Jewish majority of the human race.  Two main Jewish answers arose from this contemplation: the rabbinic answer and the Jewish-Christian answer.  And for centuries, both of these answers were totally acceptable Jewish options. This idea goes against our own conditioned reflex that Christianity and Judaism are two different worlds and that Christianity is a departure from and alien to the Jewish party line. Not so!  There were a diversity of Jewish parties, and the party of Jewish Yeshua-believers was one of them. Bonafide. Legit.  A kosher Jewish option.

Second Game-Changing Idea - A pro-Torah Jesus -  It is a truism that Jesus was very Jewish, but most of us don't go deep enough with that thought.  Boyarin sees Yeshua as a defender of Torah engaging with the reforms of the Pharisees at a time when the Pharisees were just one party among many. Yeshua is Torah-loyal. We see him debating with the Pharisees with “You say this, but Moses says this," as in this passage from Matthew 15:

Then Pharisees and scribes came to Jesus from Jerusalem and said, 2 “Why do your disciples break the tradition of the elders? For they do not wash their hands when they eat.” 3 He answered them, “And why do you break the commandment of God for the sake of your tradition? 4 For God commanded, ‘Honor your father and your mother,’ and, ‘Whoever reviles father or mother must surely die.’ 5 But you say, ‘If anyone tells his father or his mother, “What you would have gained from me is given to God,” 6 he need not honor his father.’ So for the sake of your tradition you have made void the word of God.

It would be a mistake to think of Yeshua here as anti-tradidtion. That is a Reformation argument which was not Yeshua's point, Rather, he is engaged in a very Jewish discussion about how Torah is to be lived out, and that we must be prepared to critique our tradition when Torah stands in judgment over our interpretations. This is a Torah-positive position which upholds tradition, but not uncritically. This is very Jewish space.  Boyarin helps us see that Jesus was a a pro-Torah activist who didn't seek to jettison tradition at all, but to engage with it and act as the loyal opposition to how some people worked things out.  After all, it was Jesus who told his Jewish audience,  "The scribes and the Pharisees sit in Moses' seat, therefore do whatever they tell you to do, just don't do as they do when they don't practice what they preach!"

Third Game-Changing Idea - The Incarnation and the Trinity are Jewish Ideas -  Boyarin shows how the concepts of incarnation and Trinity so identified with Christianity and viewed as wholly other by most Jews, were actually very Jewish concepts.  Boyarin insists that Jesus, when he came, came in a form that many, many Jews were expecting: a second divine figure incarnated as a human.   In the late 2nd Temple period until the 4th century and beyond,  there was a wide variety of acceptable Jewish expectations about God’s redemptive game plan. Some believed the only right view was that there was one redemptive figure, others believed that God had a divine deputy or emissary or son higher than the angels, God’s intermediary to the world in creation, revelation, and redemption. Some believed redemption would be accomplished through a human being—a descendant of the house of David, who would take up scepter and sword, defeating Israel’s enemies and restoring her to glory. Some believed this divine adjutant would not be human at all.  And Boyarin says “And still others believed that these two were one and the same, that the Messiah of David would be the divine Redeemer." These were all unquestionably legitimately Jewish views! If you insist, "No! That can't be!" Boyarin would insist that you are reading later polarizations and theological battle lines into a situation where the thoughts we find in the New Testament were all considered kosher, even if not accepted by all.  As he puts it,  “Christology, or the early ideas about Christ, is also a Jewish discourse and not—until much later—an anti-Jewish discourse at all."

Fourth Game-Changing Idea -  Christians Invented Judaism  as a Separate Religion - We are wrong to consider the New Testament as part of a debate between Judaism and Christianity.  The categories Judaism and Christianity were a Christian invention dating to the 4th century when St Jerome, St Augstine of Hippo, the Emperor Constantine and the Church under their influence sought to develop checklist criteria for determining who was in and who was out of the Church. They especially wanted to eliminate the possibility that any could call themselves both Jews and Christians, or even that any Christians could keep the Jewish calendar and live a Jewish life.  This was an anti-Judaic and even anti-Semitic political push to disempower Jews who believed in Jesus and those who admired their way of thinking and living. It served Constatine's, Augustine's,  and Jerome's purposes to draw a dividing line inventing the category Judaism as a contrast to their category Christianity.  However this was not how Jews thought, not for centuries. Boyarin teaches us that it wasn’t until the 18th or 19th century that Jews even had a word for Judaism in their own language. This is because the concept was alien to their ethos.

Boyarin insists that to be a Jew formerly was not about “a separate institution, a separate sphere of  'religion,' still less a ‘faith’ for Jews. [Instead] we are talking about the complex of rituals and other practices, beliefs and values, history and political loyalties that constituted allegiance to the People of Israel, not a religion called Judaism."    He quotes from Paula Fredricksen who wrote, “In antiquity . . . cult is an ethnic designation; ethnicity is a cultic designation”  In other words, the question in ancient times was more, “of what people are you a part?” which was something demonstrated in your allegiances, alliances, values, worldview, historical stream, ways of honoring that people’s god/gods, it was not simply a question of what religion you practiced.  The category was much broader and communal and affiliational rather than, as today, personal.

Some Conclusions to Bear in Mind - Where is this all heading?  Why is reconsidering our way of looking at things important and how might things look as a result?  How are these kinds of thoughts game changers?  Again, we need to hear Boyarin:

One difference that I expect this discussion to make is that Jews and Christians will need to begin to tell different stories about each other in the future, On the one hand, Christians will no longer be able to claim the Jews willfully, as a body, rejected Jesus as God.  . . Many ancient Jews simply accepted Jesus as God, and they did so because their beliefs and expectations had led them there. Others while holding similar views about God, found it hard to believe that this particular, seemingly undistinguished, Jew was the one they were waiting for.

On the other hand, Jews will have to stop vilifying Christian ideas about God as simply a collection of ”un-Jewish,” perhaps pagan, and in any case bizarre fantasies.  . . . Recognizing these ideas as deeply rooted in the ancient complex of Jewish religious ideas may not lead Jews to accept them but should certainly help us realize that Christian ideas are not alien to us; they are our own offspring and sometimes, perhaps, among the most ancient and all Israelite-Jewish ideas.

On the other hand, certain kinds of modern 'liberal' Chrsitian apologists . . .  will have to stop separating out the 'good Jesus' from a 'bad Christ.' I suggest that Jesus and Christ were one from the very beginning of the Jesus movement. It won't be possible any longer to think of some ethical religious teacher who was later promoted to divinity under the influence of alien Greek notions, with his so-called original message being distorted and lost; the idea of Jesus as divine-human Messiah goes back to the very beginning of the Christian movement, to Jesus himself, and even before that.

Let me say that the wrong conclusion to take from this is that "the Christians were right after all." Boyarin himself is clear that Christianity veered sharply from the path of truth creating a non-Jewish Torah-rejecting Jesus and a kind of Judenrein Christianity and polarized way of thinking and behavior that bore the most bitter fruit and is still with us today. And let us be clear that Boyarin himself does not embrace Yeshua as Messiah, so don't let anyone reading this blog post go peddling any such idea on the web!  But it is time for a new kind of discussion.

Both Christians and Jews need to gather around a table to recognize and reconsider old assumptions. Seeing Jesus as thoroughly Jewish, as pro-Torah and not anti-tradition, while seeing core Christian beliefs about him as intrinsically Jewish as well, creates a field of opportunity where Christians and Jews can have a new kind of conversation. The Apostle Paul said that Jesus came to make peace between Jews and Gentiles.  Here at Interfaithfulness we believe that revising our views of this Jesus and the message concerning him along lines compatible with what Boyarin lays out could just make that shalom break out all over again. And wouldn't that be a game-changer?

If you want to know more about these things, and if you are interested in changing the game that Christians and Jews have been playing all these years, feel free to contact us at Interfaithfulness. Our address is P.O. Box 6137, Altadena, CA, 91003-6137. Our phone is 626-765-4359.

Next Post
Boundaries: Can They Change and Be Renegotiated? »