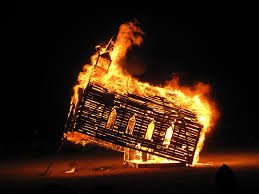 (This article was written for a Christian magazine, and therefore a Christian audience.  But whoever you are, see if this doesn't sound an alarm that you want or need to hear).

It is common, when speaking of fires, to rate them as one alarm, two alarm, three alarm, and so on. Each additional alarm indicates an assessment of the greater severity of the conflagration. Employing this metaphor, I regard Andy Stanley’s April 29, 2018 sermon, “Not Difficult,”[1] to be a five-alarm fire, very serious indeed. His errors would be grave enough in isolation, but in combination, they constitute an inferno that the entire evangelical neighborhood should attend to. 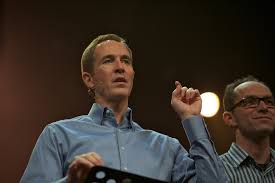 An attentive listener will note the manipulative framing of the issues Stanley addresses:

I don’t know what you were told when you received your first Bible. . . . You get a Bible, you get to pray the prayer of salvation, and all the parents are like "Sigh. . . Now I just got to teach them to drive.” It’s how Christians think. If that was your experience and you got your first Bible, it didn’t really come with instructions and nobody told you that this big book, probably the biggest book you ever owned, was actually arranged around three different arrangements, or three different covenants.

Addressing an audience where many have prior experience with Southern church culture, Stanley portrays that culture as characterized by religious rigmarole, and unprepared children given oppressively large Bibles nobody ever really explains to them. He insinuates that there has been a conspiracy of neglect, as crucial matters of biblical structure and content were wrongly withheld from these innocents, to whom he now presents himself as liberator.

This kind of stage-setting smells of smoke, and with this kind of smokescreen, there is certainly fire. The first alarm.

Continuing in his role as putative truth-teller, Stanley elaborates on the formerly hidden secrets he has now come to reveal.

So nobody told me that [the Bible] was divided into these three sections that were written to three different audiences within a very, very specific historical context, and that it was sequential, and that there was a story line, but as the story moved along what was important became less important because something more important came along. There were three different groups, there was an individual, that had a big promise, a big covenant was made between God and an individual, and then God made a covenant with a nation, and then God made a covenant with the world, the nations. . . . Abraham was the individual, Israel was the nation, and we’re part of the nations.

Even if we accepted his threefold division, is it true that with the coming of God’s covenant(s) with Israel and then the nations, that God’s covenant with Abraham becomes less significant? Does not Abraham become more significant as the biblical record continues, so that Paul will, in writing to Gentiles, insist that Abraham is the father of us all? And was God’s covenant with Abraham ever simply a covenant with an individual, and for his sake alone? Was it not always for the sake of his progeny and for all the families of the earth from the very beginning?[2] And of the time of the end, does not Jesus say “many (from among the nations) will come from east and west and recline at table with Abraham, Isaac, and Jacob in the kingdom of heaven?”[3] Abraham remains an iconic hero to the very end, and a champion of Israel and the nations.

Similarly, contrary to Stanley’s construct, with the progress of redemptive history, Israel becomes more important, not less so. Paul, Apostle to the Gentiles, reminds those in Ephesus of their former lost condition as “separated from Christ, alienated from the commonwealth of Israel and strangers to the covenants of promise, having no hope and without God in the world.”[4] For Paul, the Jewish people remain home base for the people of God, not a now eclipsed Plan B with the church being God’s Plan A. The Apostle goes on to remind the Ephesians (and Andy Stanley) that now, through Christ, the Gentiles “are no longer strangers and aliens, but (they) are fellow citizens with the saints and members of the household of God.” [5] In his argument, who are the saints and members of the household of God with whom the Gentiles are fellow citizens? It is Israel. There is nothing passé about them.

Because of his axiomatic supersessionism, Stanley will have none of this. He assures his listeners that Israel supersedes Abraham, and the church supersedes both Abraham and Israel, leaving each with diminished significance. But his construct is easily disproven even from the New Testament that he prefers as alone worthy of being the Christians’ scripture.

Third Alarm: Stanley Misrepresents the Intent of the Jerusalem Council  Through Overstatement

Today we are going to talk about one of the most overlooked, underplayed, least taught about narratives in the New Testament. And understand this is important language. I said the New Testament; I’m not saying the Bible. I’m talking about this collection of ancient first century documents that got put together later on, and was called the New Testament. And one of those documents is called Acts, A-C-T-S. It was written by Luke . . . and in this explanation of what happened in the early years of the church there’s a meeting, there’s actually a council, a church meeting . . . that is so important because it defines your relationship with the Old Testament. And because that relationship maybe has not been defined or has been for you, it may be one of the things that’s tripped you up in your faith.

Reinforcing his frame of himself as liberator, his hearers as victims, and the rest of the church as negligent and oppressive, Stanley mischaracterizes the Jerusalem Council as redefining Gentiles’ relationship to the Old Testament. He misstates the issue in preparation for an argument he will make that the entire Old Testament is to be jettisoned in the name of Christian progress.

In a statement that cannot be surpassed for its chilling effect, Stanley misleads by his overstatement, “Peter, James, and Paul elected to unhitch the Christian faith from the Jewish Scriptures.” But surely this is not the outcome of the Jerusalem Council. 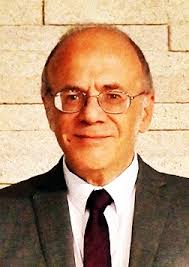 Richard Bauckham speaks clearly to this issue and summarizes the arguments of Peter, James and Paul. He also demonstrates how James’ argument for the four provisions required of Gentiles in the apostolic decree are founded in Torah, rather than being the occasion for casting it away in celebration of God’s new day, as Stanley would have us believe.

The issue is whether Gentile converts must be circumcised and thereby obliged to keep the Law of Moses (15:1, 3), whether, in order to belong to the eschatological people of God, they have to become Jews. . . . Peter argues that the miraculous charismatic phenomena which accompanied the conversion of the first Gentile converts constituted a declaration by God that Gentiles are acceptable to him as Gentiles . . . and Paul and Barnabas support this argument. . . . He [James] argues that the prophets, when they predicted that Gentiles would join the eschatological people of God, also made it clear that they would do so as Gentiles.[6]

Bauckham presents a detailed analysis of James’ exegesis and argumentation, showing how James’ modifications of the Amos text echo Hosea 3:5, Jeremiah 12:15, and Isaiah 45:21, using time-honored Jewish hermeneutical links to point his knowledgeable hearers further back to texts in Leviticus 17–18. That context specifies four guidelines for “the alien who sojourns in your midst.” Bauckham states, “These correspond to the four prohibitions of the apostolic decree, in the order in which they appear in the apostolic letter (Acts 15:29; cf. 21:25).”[7]

Contra Stanley, the apostles are not declaring a new day when Torah will be forsaken, however reluctantly. Rather they employ and honor Torah in identifying the communal status of and guidelines for Gentiles whom the prophets and the Holy Spirit have indicated must be fully received as Gentiles.

Despite referring to the Old Testament as “this extraordinary book,” Stanley portrays it as another burden from which he is happy to deliver oppressed Gentiles, saying to them, “if you’ve lost or are losing faith because of something that is in or about the Bible . . . especially the Old Testament, I can’t tell you how glad I am that you’re here, because I’m convinced as I’ve talked about throughout this series that perhaps you’ve lost or you are losing faith unnecessarily.” What is unnecessary is the Old Testament, or so Stanley says.

Because his position is so startling and absolute, I quote extensively below to demonstrate how adamant he is about it.

This was new and better. Church leaders unhitched the church from the world view, from the value system, and regulations of the Jewish Scriptures. Not just how a person became a Christian. From the whole worldview. Everything is different. The imperatives, everything is new. Peter, James, etc. detached the church from Judaism. . . . Peter, James, and Paul elected to unhitch the Christian faith from the Jewish Scriptures. We must as well. Because we must not make it difficult for those Gentiles who are turning to God. They didn’t; we shouldn’t either. The faith of the next generation may depend on our getting this.

Stanley seems oblivious to how the New Testament quotes the Old nearly nine hundred times. The faith he is peddling bears scant resemblance to the faith once for all delivered to the saints.

It pays to think for a moment exactly what kind of faith people can have without the Old Testament. Is anything essential lost from losing the God of Jeremiah, and Isaiah, of the Psalms, and of the Torah? Just where does our concept of the holiness of God come from if our Bible begins at Matthew? And what do we mean by calling Jesus the Messiah without an Old Testament to tell us what the term means? Is this castrated faith worth delivering to the next generation?

Fifth Alarm: Stanley Destroys The Church’s Relationship with the Jews as Well as Its Mission to the Gentiles

I urge everyone to listen to Stanley’s sermon and ask and answer this question: What opinion of the Jews and of their religion is he implanting in the minds of his hearers? And how will the Jewish relatives and friends of his listeners characterize Christian opinion of themselves and their religion? Would any self-respecting Jew want to join such a crowd and their Jesus?

Furthermore, the Gentile world is broader than the American South. In much of that world, a Bible without the Old Testament is incomprehensible. This is because many two-thirds world cultures are far closer to that of Abraham than they are to Paul’s Roman world. If the Church follows Stanley’s lead, it will find itself without a bridge to the hearts and minds of millions who need to understand and embrace the grace God offers them.

[1] All material from Stanley quoted from a personal transcript made while watching Aftermath, Part 3: Not Difficult // Andy Stanley [Video]. Retrieved May 9, 2018 from https://www.youtube.com/watch?v=pShxFTNRCWI&t=351s.

5 comments on “Andy Stanley and His Five Alarm Fire”

Next Post
Trash Talk is Garbage: What To Do About It (Part I) »